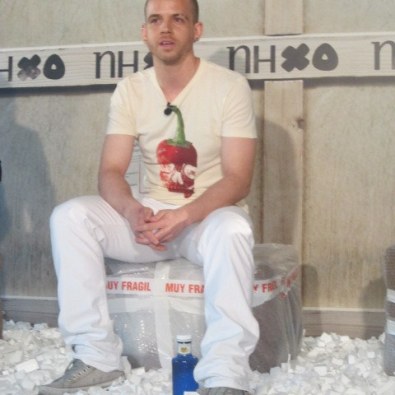 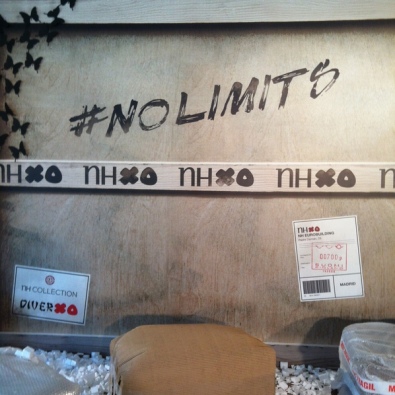 “I just can’t fit everything that’s racing through my head into DiverXO the way it is now, so I wanted a space where it was possible to develop not only the restaurant itself but also my vision of how haute cuisine can move forward.”

David Muñoz, the 34-year-old chef at the helm of Madrid’s only restaurant with three Michelin stars, was sitting on a box in the first-floor room in the NH Collection Eurobuilding hotel in the north of the city that will house the new DiverXO from July.

“It is going to be an absolutely spectacular space. I’m not just changing the way it looks; the whole concept will be different. We decided a long time ago that we wanted to offer a very personal version of haute cuisine and the experience that surrounds it, which has been a part, if not all, of our success. Here in the new space we intend to break the mould of what people expect from a three-Michelin-starred restaurant. I would go as far as to say that we are creating a world first.”

Sounds intriguing, doesn’t it? At the moment it is just a large, square room with big windows on two sides. But top designer Lázaro Rosa Violán – responsible for the stunning Only You hotel in Madrid and the Ajoblanco restaurant in Barcelona, to name but two of his projects – is dreaming up the transformation, so anything is possible.

A different sort of gastronomic experience

“The great gastronomic temples in the world focus all their efforts on the food. Of course, the room is nice too, but what happens at the table, even at pioneering places like elBulli, is pretty standard. The food is served in more or less the same way and the same goes for the wine. We are going to shake all that up quite a bit.”

Muñoz is keeping schtum on the details for the time being, but despite the larger space – almost twice the size at 520m2  – he is not increasing the numbers very much. The present DiverXO seats 28 and the new one will only serve a maximum of 40 diners. The total number of staff will increase from 30 to 40 or 45.

So we can expect a lot of space between the tables – and maybe very large tables. Or even no tables at all. Who knows? Ángela Montero, who is in charge of front of house and is Muñoz’s wife, is no doubt bringing a few imaginative twists to the new project too. But actually getting a table at DiverXO NH Collection Eurobuilding – as it will probably be called – is going to be very tricky indeed. Bookings are currently taken six months in advance and you have to be very quick off the mark. Opening the new restaurant in the first fortnight of July will allow just enough time for those all-important Michelin inspectors to drop by before the appraisal period closes in mid August.

Is London ready for the StreetXO experience?

Muñoz and his team will barely have time to draw breath, let alone think about a summer holiday, before opening a huge new venture in London by the beginning of the August. This is a much bigger, more ambitious version of StreetXO, the Asian-inspired street food joint that opened at the end of 2013 in the Gourmet Experience food court on the ninth floor of El Corte Inglés department store in the Plaza de Callao in the centre of Madrid.

The fast and furious StreetXO has been a huge success since the word go and Muñoz is planning to open a bigger operation in Madrid in the autumn.  “It will be similar to the London one, which Lázaro is also designing.” he explained. “Almost 80 people will be able to sit around the bar at any one time and in Madrid we will have maybe 50 at the bar.  Food, music, cocktails – it’s going to be a lot of fun.”

The new DiverXO won’t be as riotous as StreetXO of course, but I think we can assume there will be a total absence of formal fustiness and plenty of surprises.  A truly original gastronomic experience indeed.

The welshcake production line at Swansea market this morning (just for you @sallydaviesbarcelona ). Named best large indoor market in the UK last week! #swanseamarket #swansea #welshcakes
Spring on the Wales Coast Path at Mumbles Pier. The steps lead up to the point where the Gower península starts. . . #Mumbles #Gower #walescoastpath
Thanks @trottaroundswansea for bringing these lovely bars of dark chocolate with wrappers by local artists back from Paris. *Almost* too pretty to eat... #chocolate #artisanchocolate
Cherry sundaes 🍒 and americanos at Joe’s Ice Cream Parlour in Mumbles with @trottaroundswansea and @justlewis70
Not a tapa - prawns in tempura ‘starter’, £5.95. Chips and champagne extra. 🦐🦐🦐
Very impressed with this gentleman in his classic Spanish cape - no doubt from @capas_sesena - in the queue for traditional Christmas sweets and biscuits #Madrid
%d bloggers like this: