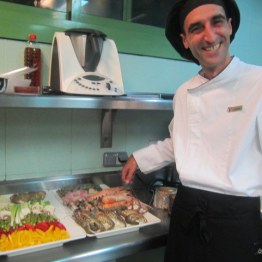 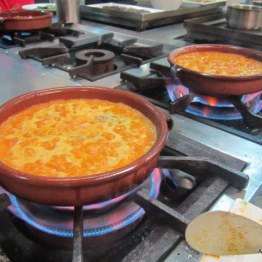 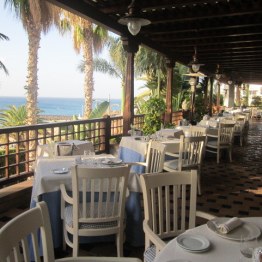 Carlos Pérez is the chef at the Isla de Lobos restaurant in the Princesa Yaiza hotel in Playa Blanca, in the south of Lanzarote. I wandered into his kitchen to talk about the cuisine of the island – and along the way I sort of helped (ahem) to make a rather sumptuous lobster rice dish – arroz meloso de marisco canario.

We were using small lobsters caught off Lanzarote, which had been cut in half. “There are three types of lobster in the sea off the island, but this is the only one that can be fished legally,” said Carlos.

We cooked the lobsters for a few minutes in hot oil in an earthenware dish then took them out and set them aside before repeating the process with prawns, squid and scallops. We added sweet pimentón paprika and puréed tomatoes, then the all-important seafood stock, which had been made with the head of a grouper, among other things.  “You need double the amount of liquid to rice for a traditional dry paella,” Carlos explained. “But we want it to be meloso, a bit wetter, so we need more. Just keep stirring and add more if necessary.”

We added some saffron, then put the prawns back in, followed by parsley mixed with garlic and olive oil. Then the lobster went back in. “Let it boil for five minutes, then turn it down and let it simmer for 15 minutes without stirring. If you stir it you break the grains and the starch comes out.”

We also added some cherne, a firm white fish from the grouper family that is apparently called wreckfish in English, which you see in restaurants all over the Canary Islands. “Cherne is very good quality because it is caught just off the Canaries in cold water,” he said.  “The tuna caught off the islands is very good too as it comes from South Africa and is bigger than the fish in the south of Spain. We get it earlier in the year here, from February. We had one here at the hotel that weighed  700 kg.”

When he was still a teenager, Carlos Pérez started working with Ferran Adrià at the legendary elBulli, where he stayed for three years. He went on to cook at the Hacienda de Benazuza outside Seville, at several top restaurants in the Canaries and in London at Sketch and Asia de Cuba – to mention just a few and he is still only 36. He has been at the helm at the Isla de Lobos for six years and has won several awards.

“As much of the produce as possible that we use in the restaurant is locally sourced,” he told me. “The dishes on my menu are very conceptual – recreating the light of the full moon on the ocean, for example, or the volcanic landscape of the vineyards in La Geria – but the ingredients are mostly traditional.”

Carlos is working with the Lanzarote government to promote the local cuisine and improve the food on offer on the island as part of the Saborea Lanzarote project. He is currently revising the menus at several of the centres created by the visionary artist César Manrique, which are key points on the tourist route on Lanzarote. He is also part of Lanzarote Cocina, which brings together 11 of the top restaurants on the island where the chefs are committed to increasing the use of local produce, creating innovative cuisine inspired by the most traditional dishes. “We want tourists to start coming to Lanzarote for the food here, rather than just the beaches,” said Carlos.

That may sound a bit far fetched right now, but after eating excellent meals at two other restaurants in the group – Casa Brígida, also in Playa Blanca, and El Risco, by the fabulous beach in Famara in the north of the island –  I don’t think it’s an unreasonable aim at all. 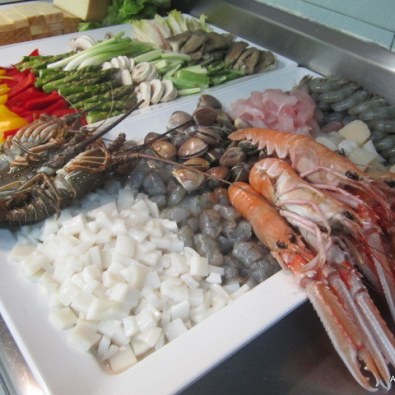 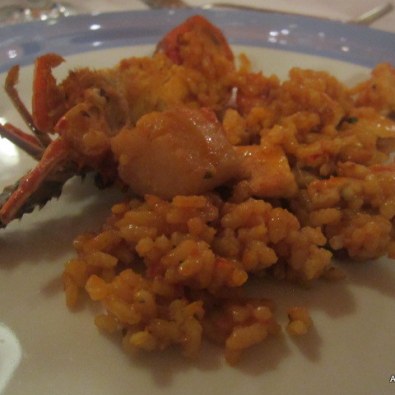 Glorious day for a walk from Pennard to Three Cliffs
My photographer friend Michelle Chaplow has just sent me this happy photo of us with chef Paco Montero a few years ago at the fabulous Abadía Retuerta Le Domaine hotel, which is surrounded by vineyards in Valladolid province. Can’t wait to do more hotel research Michelle!
Wish I was swimming in the spa pool at Finca Cortesin this morning
Dramatic light over Swansea Bay today
Here’s to hopping into 2021 and skipping ahead a few months until we’re all jumping for joy again. Happy new year everyone! 🥂🍾
Current mood...
Loading Comments...
Comment
×
<span>%d</span> bloggers like this: