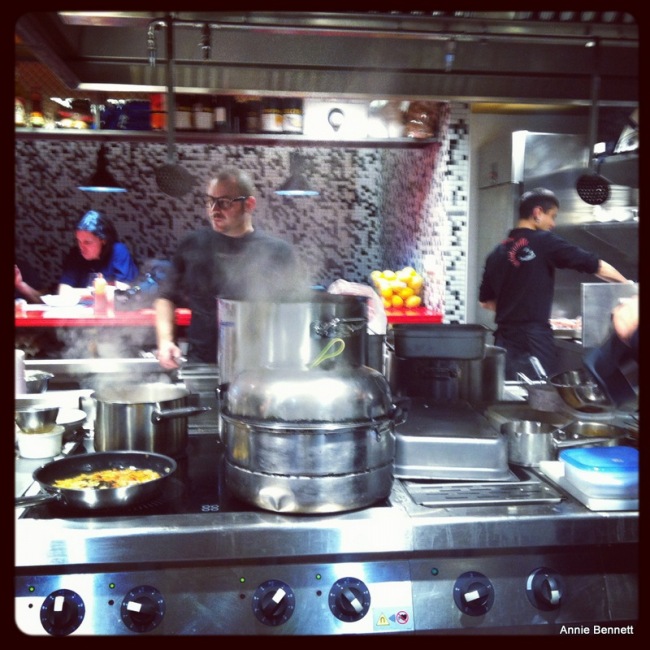 David Muñoz is only 33 but has just been awarded his third Michelin star for the Asian-influenced yet original food at his restaurant DiverXo in Madrid – the only restaurant with three stars in the Spanish capital. At the end of 2012 he opened a very different place, StreetXo, in Gastro Experience, the gourmet food hall on the 9th floor of El Corte Inglés department store on the Plaza de Callao in the heart of the Spanish capital.

StreetXo, inspired by Asian street food stalls, was an instant success, with customers jostling for a place at the bar to watch the groovy chefs working at a frenetic pace creating zingy dishes such as chilli crab with pimentón, chipotles and palo cortado sherry.

The dynamic young chef will soon be bringing this concept to London, with a branch of StreetXo slated to open in Mayfair before Easter 2014. Muñoz already knows London well, having worked at Nobu and Hakkasen. He will be very hands on at StreetXo London, spending a couple of days a week there and is taking two of his key chefs, Manu Villal a and Jonathan Seijo, to lead the kitchen.

At 400 m2, StreetXo London is going to be a bit different from the tiny bar in Madrid. As he told top Spanish restaurant critics José María Capel and Julia Lozano in an interview on their site Gastroactitud, “There will be a huge U-shaped bar with two cooking islands inside and high tables around the outside. There will be cocktail and Champagne bars too.  And 20 chefs working frantically, the woks in flames…”

I was thrilled by both the food and the vibe at StreetXo Madrid when I first ate there last December and can’t wait to try the London version. Meanwhile, Muñoz is already thinking ahead to New York and Singapore. Start queuing now..