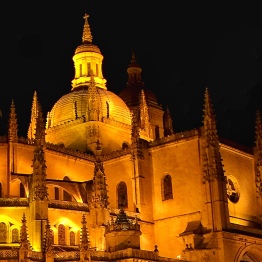 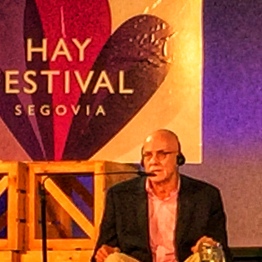 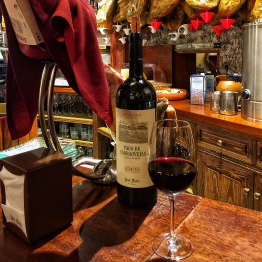 Let’s face it, questions from the audience at the end of talks by famous authors can sometimes be a bit longwinded, off topic or just plain bonkers. At the Teatro Juan Bravo on Segovia’s Plaza Mayor last Sunday evening, however, something quite different happened. One after another, people stood up and just said “Thank you”, “Thank you for telling my story” and “Thank you for writing about my family”. It was a quite extraordinary experience; one of many at this year’s Hay Festival in the fairytale Castilian town.  Fernando Aramburu had been talking to scriptwriter and producer Aitor Gabilondo and jourmalist Jesus Ruiz Mantilla about the adaption for an HBO television series of his novel Patria, which has been on the bestseller lists since it was published in 2016 and has won countless awards. The book is set in the Basque Country and tells the interweaving stories of families living through the decades of ETA terrorism. It’s one of those stories that instantly draws you in, where you start caring about the characters from the first page. I can’t wait to see the series when it comes out next year.

Another surprisingly powerful emotional punch was delivered by the artist Marc Quinn, who was interviewed by Dylan Jones, editor of GQ magazine and chair of the Hay Foundation. As a dramatic storm with sheet lightning raged outside, the talk took place at the IE University in the Santa Cruz La Real monastery, which was built in the 15th century and is the main venue for the festival. Quinn, best known for his sculpture of Alison Lapper, created for the fourth plinth in Trafalgar Square, was talking about his new project, Our Blood, aimed at highlighting the refugee crisis. The work will consist of two cubes, one filled with the blood of 2,500 refugees from different countries, and the other with blood of celebrities and anyone who wants to donate. It will be exhibited in a transparent pavilion designed by Sir Norman Foster on the steps of the New York Public Library in 2021. An elegant refugee from Mali recounted calmly and eloquently how she had escaped from her country and made a new life for herself in Barcelona – and the terrible toll on her family. Next to her was her teenage brother who, when asked what he wanted to happen next, simply replied that he “just wanted a normal life”. Their other brother had died while trying to cross the Mediterranean. The audience was totally gripped and appalled by their heartbreaking story. It certainly made us all realise how lucky we were to be in Segovia last weekend, listening to ideas being expressed freely and meeting people from all over the world.

For me, one of the most moving events at Hay Segovia is always the morning spent down by the Eresma river at the Romeral de San Marcos, an exotic garden set on the side of an escarpment. It was created by the artist and landscape architect Leandro Silva, who also restored the Botanic Garden in Madrid. His widow Julia is a wonderful lady who has been a key figure for the festival since it began 15 years ago and still lives in the house there. Around 70 people – I think there were even more this year – gather to walk through the narrow paths of the garden in the shade of quince, plum and pear trees, stopping every now and again to listen to poems and texts recited by writers, actors and anyone else who fancies having a go. It sounds like it would be shambolic, I know, but somehow it works and the combination of the poetry with the scents of the plants and flowers makes for a truly magical experience. You’ll just have to trust me on this one, but it’s worth going to the festival just for this event. This year, the new ambassador to Spain, Hugh Elliott, recited a few poems too. He took part in several events and seemed to be thoroughly enjoying himself. I’m sure he’s going to be as enthusiastic a supporter of the festival as his predecessor, Simon Manley.

Other highlights this year for me included the top crime writer James Ellroy, who was surprisingly hilarious and snorted, growled and roared his way though his interview with Guillermo Altares. There was a fascinating talk too by culinary historian Vicky Hayward, who talked about her award-winning book New Art of Cookery by Juan Altamiras, with the charismatic writer and presenter Boris Izaguirre. FT Weekend hosted a very lively debate on Europe, moderated by their literary editor Fred Studemann, with their new Madrid correspondent Daniel Dombey, FT deputy editor Roula Khalaf, influential foreign affairs’ journalist Anna Bosch of the En Portada programme on Televisión Española and Luis Garicano, leading economist and member of the European parliament for the Ciudadanos party. Did they solve Brexit? No, but they put forward a lot of good ideas and made us all laugh in the midst of all the gloom.

There is always a lot of laughter at Hay Segovia. And a lot of drinking wines from the Castilla-León region – Ribera del Duero reds and Rueda whites for a start – as well as the obligatory suckling pig at Mesón de Cándido and hours whiled away with coffees and beers on the terrace at La Concepción (which everyone calls the Concha) on the Plaza Mayor. There was a lot more packed into three days this year too. A week later, ideas, encounters and conversations are still trickling into my mind. Already looking forward to next year.

My photographer friend Michelle Chaplow has just sent me this happy photo of us with chef Paco Montero a few years ago at the fabulous Abadía Retuerta Le Domaine hotel, which is surrounded by vineyards in Valladolid province. Can’t wait to do more hotel research Michelle!
Wish I was swimming in the spa pool at Finca Cortesin this morning
Dramatic light over Swansea Bay today
Here’s to hopping into 2021 and skipping ahead a few months until we’re all jumping for joy again. Happy new year everyone! 🥂🍾
Current mood...
All set for a virtual drive around Catalonia, tasting the local specialities along the way @catalunyaexperience #GrandTourCatalonia #ajourneyfullofjourneys
Loading Comments...
Comment
×
%d bloggers like this: