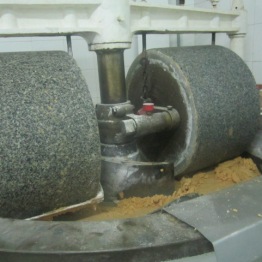 There is a sweet fragrance in the air in Jijona in December. As most of the hillside town is given over to making turrón nougat for Christmas, this is hardly surprising really. In large and small factories, almonds are being ground and mixed with honey to create the tons of turrón that forms an essential part of the festivities for most Spanish people.

Jijona – or Xixona – is 17 miles from Alicante in the Valencia region in the south east of Spain. Heading north from the Mediterranean city, you are driving through dramatic Wild West country as soon as you get off the motorway.

The Primitivo Rovira factory is on an elegant, elongated square right in the heart of the town. I say ‘factory’, but it is actually a handsome townhouse with various rudimentary machines on the ground floor, some of them more than a century old.

Inside, I talked to Primi –  that’s him in the shower cap – whose full name is actually Primitivo Rovira of course. “This is a family business, we are now the sixth generation. There’s my dad, me, my sister and my brother in law. And another 21 people work here with us. The firm was founded in 1850, right here, on the ground and first floors, and in 1902, the upper floor was built. We live upstairs.”

Turrón is probably derived from a Moorish recipe and might have Jewish heritage too. What is known for definite is that it was being delivered to the Spanish court five centuries ago.  There are two main types: Alicante, which is hard with whole nuts in it, and the softer Jijona which, hardly surprisingly, is what they specialise in here.

“We start late with the manufacture, to use the almonds when they’ve just been picked, so that the turrón is really fresh. The trees are near here, either around Jijona or in the surrounding area. The process is  totally artisanal, using the best local ingredients, so that the turrón is as good as it can possibly be,” Primi told me as we walked around the production area, swerving past buckets of Marcona almonds and sacks of lemons.

“We make both Jijona and Alicante turrón. Although they are different when finished, they start off exactly the same: honey, sugar and egg whites are all stirred together until the mixture is the right consistency and then the almonds are added. And then the Alicante version is ready; it only takes half a day. Jijona, on the other hand, takes three days to make as the mixture has to go through a series of grinding, refining, resting and pounding procedures to attain the texture that we are after.”

The factory floor is tiny considering the amount they produce: 30,000 kilos of turrón, plus a few other bits and pieces. They start in October and work flat out until Christmas Eve. For most of the rest of the year, the factory is closed, apart from in summer when they make ice cream. I can only imagine how good that is.

“Our new thing is chocolate turrón. Well, I say new,  we’ve only been making it for about 30 years,” said Primi. Everything is cut by hand into slabs, except the Alicante and chocolate varieties, which are too hard for even the sturdiest knife and have to be sliced using saws. I watched them making Pan de Cádiz, which is their most labour intensive product and looks like a dense cake. It is made in layers, by hand: marzipan, egg yolk, turrón, sweet potato and glacé fruit with more marzipan on top. I was intrigued by the piñas, which are hefty marzipan cones that are very typical in Jijona. I put on half a stone just looking at them I’m sure. 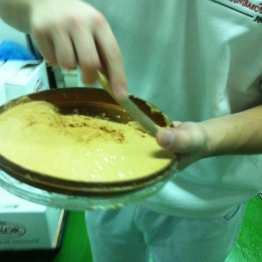 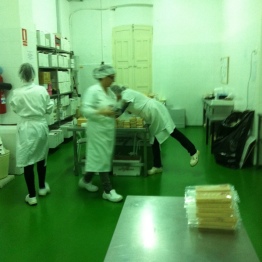 We stopped at one of the mills, which was whooshing and churning away.  “Now José is going to make crema a la piedra, which is not as well known but is very traditional, because it was only eaten by the workers here in the factories. Now it is starting to be produced for sale as well,” said Primi, holding  out a tray of it for me to try. Creamy, zingy and totally fabulous, obviously.  “It looks similar to Jijona but is actually very different. It is made with almonds, sugar and lemon zest – but no honey – which are all mixed together, then put through the refiner twice. And then a bit of cinnamon is added at the end. There is no heating process. It is called a la piedra because it is made just in the stone mill and the stone refiner.”

Back at the entrance, there was an awful lot of packing going on, with the employees putting dozens of slabs of turrón into boxes. “We only sell through a few shops and we don’t deal with distributors,” Primi explained. “It’s nearly all direct to individuals for home use. We send out a list to our customers every year and we send whatever they want. People buy from us year after year, decade after decade. They usually just ring us up but you can order online now too.”

After seeing all the products being made, I fancied quite a few things, as you can imagine.  I ended up carrying a rather large box back to the car, but somehow I don’t think it will last very long. Have a look at Primitivo Rovira for more temptation. 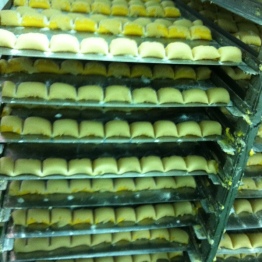