Marcos Morán, the ebullient young chef at Casa Gerardo, has just put a sardine in a liquid flavoured with yeast in front of me, with malt sponge and a slice of green chilli on top. Not unreasonably, I ask him what on earth he was thinking of when he came up with the dish.

“Something I like a lot is a sardine bocadillo, a big sandwich made with sardines in oil, from a tin. I really like those bitter flavours.  And I like the bread for my sardine bocadillo to be a bit underbaked because I just love the flavour of yeast.”

I get a whiff of dough off the dish and an image of making bread in a bowl flashes into my head.

“Combining yeast with malt gives an unusual, slightly bitter taste and a sort of milky flavour. I just like this mix with sardines. I don’t know why.”  He shrugs his shoulders and giggles (he’s a bit of a giggler). “It is about the smell rather than the taste, because we put the fresh yeast into the stock at the end.”

The dish is elegant and exquisite but also quite disconcerting. The same could be said of the little chunks of eel and cucumber, skewered on a wooden stick, served alongside – delicious but again discombobulating.

Marcos chuckles as he explains its origins: “Once when I was travelling I ended up in this awful Chinese restaurant. I ate very badly, except for this one cucumber dish, which really intrigued me. So I ventured into the ghastly kitchen and was amazed to spot a vacuum sealer on the worktop.  The chef told me he used it to pickle the cucumber with rice vinegar, water, salt and sugar – always done on the day.”

I am beginning to realise that there is a story behind everything at Casa Gerardo; not just on the menu, but in the restaurant itself, which has been going for 133 years.

Back in 1882, Marcos’s great-great-grandfather opened a roadside tavern here in Prendes, in Asturias in northern Spain – near the coast, about five miles from the city of Gijón and seven miles from Avilés, in a landscape of rolling green hills. It has been rebuilt, extended and remodelled a few times since then and now is smart but still rustic and traditional.

Marcos, 36, runs the restaurant with his father, Pedro, who is 62 – and his mother and sister are very much involved too. It has had a Michelin star for more than two decades, so they are obviously doing something right. A lot of people think the second star is long overdue, particularly as the restaurant has evolved so much over this period – not that they’ve thrown the baby out with the bath water or anything daft like that. The food may be elaborate but there is no doubt that family tradition is all important here – Marcos represents the fifth generation at Casa Gerardo after all.

“My grandfather used to grow potatoes and when I was a little boy I often went out to the fields with him and my dad to help pick them. When we came back home, the smell of earth was on our hands. I remember it really vividly and that strong childhood memory is what I’m trying to recreate in this dish.”

The dish he is talking about is an infusion of potato skins, which may not sound very appetising, admittedly, but bear with me.

“Our family has always made a broth from the bones of a pitu caleya  – the local breed of chicken, which are totally free range. The stock has a mild flavour and we use it for everything. For this dish, we cook the potato skins in it at a very low temperature and add locally-grown peas, potato balls and a quail’s egg yolk.”

It tastes extraordinary, and this time a bucolic green countryside scene floats into my head.

It is not all fancypants conceptual cuisine at Casa Gerardo however, some of you may be relieved to read. The menu also features traditional Asturian dishes and the restaurant is perhaps most renowned for two of the most famous dishes in the region: fabada and  arroz con leche.

They have been making fabada here since they opened and it is often referred to as the best in Spain by people who know about these things. A stew of butter beans with  chorizo and morcilla sausages, pork shoulder, slab bacon and  a few other bits and bobs – all from Asturias of course – fabada is inherently rustic and robust, but at Casa Gerardo is lighter and delicate with slinkily soft beans with a buttery, nutty flavour. The sausages are served separately – called compango, which is my new favourite word – and you get a tasty croqueta de compango too.

Arroz con leche is the Spanish version of rice pudding, made with cinnamon and lemon. This one is indeed the best I’ve ever tasted – and there have been quite a lot over the years. When I say ‘tasted’, I really mean scoffed, even though this is the last dish of  a 20-course menu and the serving is generous to say the least.

You might think that Marcos would have quite enough to keep him busy, but he also runs the superstylish Hispania in the City of London, which is rather more than a restaurant as it occupies a huge building – previously a bank – that is really more of a dynamic Spanish gastronomic hub with a bar and shop as well as the dining areas and spaces for events. And then there is his latest venture in Madrid, La Huerta de Merchina in Platea Madrid – a spectacularly swanky gourmet centre in a former cinema. This new outlet is all about slow food with the focus on the freshest fruit and vegetables with zingy salads and juices on the menu.

As you can see, there is rather a lot to say about Casa Gerardo and the Morán family, which is why I can’t wait to get my hands on a copy of the book Casa Gerardo – 50 steps of contemporary cuisine, which will be published by Montagud Editores in September. 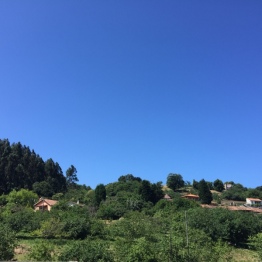 Easyjet flies to Asturias from London Stansted. I stayed at the NH Collection Palacio de Avilés in Avilés.

Soap not cheese. Wonder how many times he had to clarify that before getting pissed off enough to make the sign 😂
You could do a fab tapas crawl in Seville following these top tips from @jose_pizarro in @obsfood today.
Friday afternoon at the beach hut with mum
Watching the tide come in
Gower coast path winding to infinity
Beautiful grey day
Loading Comments...
%d bloggers like this: