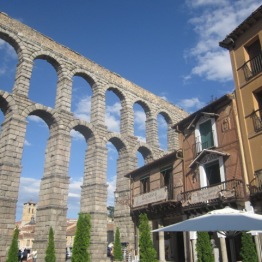 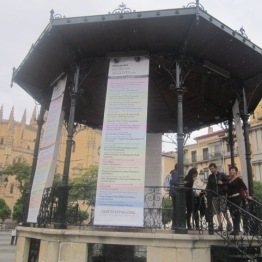 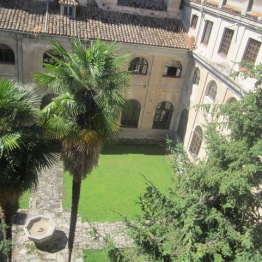 It is the 10th edition of the Hay Festival Segovia this year and the anniversary will be celebrated in the historic town with an impressive programme of events featuring leading writers, artists and cultural commentators – with lots of food, wine, music and dancing too of course.  Most of the action takes place from Thursday, September 24th to Sunday 27th,  but there are things going on from September 11th  and the official opening event is on September 19, with an appearance by bestselling Spanish novelist Maria Dueñas.

The exceptional thing about the Hay Festival in Segovia is that events take place in extraordinary venues all over town: monasteries, churches, convents, palaces, hidden gardens, secret courtyards and even a former prison. Spending a few days there during the festival means you experience Segovia in a very different, more intimate way than you would just visiting as a tourist.

The programme is still developing but is looking really interesting so far. On Sunday September 20th, Egyptian writer Alaa Al Aswany, author of the bestseller The Yacoubian Building, will be discussing Cairo Automobile Club, which has been published in Spanish. There is a focus on Arab culture this year, with concerts, films and exhibitions organised with the collaboration of La Casa Árabe.

One of the main venues is the Santa Cruz La Real monastery on the banks of the Eresma river,  which is now part of the IE University. Sadie Jones, author of The Outcast, is appearing there, as well as the leading philosopner AC Grayling, who will be talking to Antonio Muñoz Molina, one of the best contemporary writers in Spain, and Peter Florence, the founder and director of the Hay Festival.

Mark Skipworth, deputy editor of The Daily Telegraph, will be there to talk about his career in journalism, how the profession has changed over the last three decades and the challenges of a fast-developing industry.

Other prestigious UK journalists who will be speaking at Santa Cruz La Real include Martin Chilton, digital culture editor at The Daily Telegraph, John Ridding, CEO of the Financial Times Group, John Hooper, Southern Europe editor for The Guardian and author of The New Spaniards, and Giles Tremlett, Spain correspondent for The Economist and author of The Ghosts of Spain.

Miriam González will be discussing the Inspiring Women campaign with Anne McElvoy, Senior Editor at The Economist, at the same venue, while her husband Nick Clegg will be talking to Pedro J Ramírez, founding editor of El Mundo who has now launched the digital newspaper El Español.

The Welsh poet, novelist and dramatist Owen Sheers will be interviewed by broadcaster Ann Bateson, presenter of Madrid Live, about his award-winning work Pink Mist and his new novel  I Saw a Man.

The Sleep of Reason Produces Monsters is an exhibition inspired by Goya by the artist and writer Harland Miller at the Palacio Quintanar, which dates back to the 15th century. He will be talking to art critic Cristina Carrillo de Albornoz, who curated the show, at Santa Cruz La Real.

These are just a few of the events at Hay Segovia this year. Over the next month, I’ll be writing more about the great things going on at the festival and will of course be there as usual at the end of September.