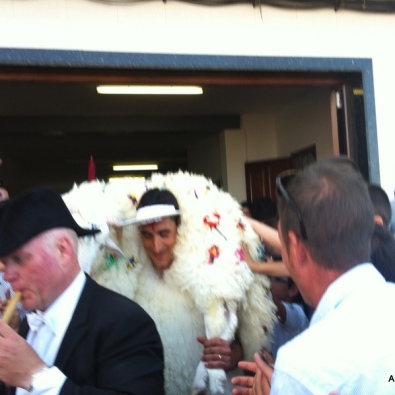 I was in Menorca this time last year and happened to see the extraordinary spectacle called the Day of the Ram, which takes place on the Sunday before the festival of Sant Joan (St John) on June 23rd and 24th.

A man swathed in sheepskin carries a live ram, bedecked with ribbons and jewelled mirrors, through the streets of Ciutadella, the pretty town and former capital in the west of the island. He’s called the Ram Man, unsurprisingly.

The ram is draped around his shoulders, weighing him down as he visits the houses of the mayor, the bishop and other important members of Menorcan society, accompanied by men in traditional costume, playing drums and flutes. Ram Man is announcing the start of Sant Joan, and inviting the bigwigs to the festival.

Hundreds of locals gather along the route and have a bit of a party at the various places he calls in at. I wandered into the courtyard of one of these houses and sat down for a minute. The daggers’ looks that were immediately shot my way from some of the local ladies made me realise this was a bit of a faux pas. One of them kindly pointed out that you have to be invited really.  I skulked off and watched the rest of the goings on in the street, running with the crowd to get the best view as Ram Man arrived at his various destinations. It is considered lucky to touch the ram, with a mass of hands reaching out every time Ram Man paused.

I had to leave before Sant Joan proper unfortunately, as I was heading off to La Coruña in Galicia, where the fiesta is called San Juan and they have a huge party on the beach – these midsummer shindigs take place all around the coast of Spain and the islands. In Menorca, the magnificent local black horses parade through the street, dancing in time to the accompanying marching bands. There are jousting tournaments and a lot of pomada, the very ‘refreshing’ drink of local Xoriguer gin and lemonade. I managed to touch the ram so maybe that will bring me the good luck to make it to Menorca for the Fiestas de Sant Joan next year.