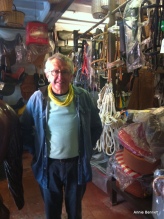 Mooching around Mahón, the capital of Menorca, last week, I came upon Armería Escudero, an extraordinary shop with a lifesize – not real – horse poking its head out onto the street. I wandered in and found a mindboggling array of all things horse-related, as well as boots, espadrilles, the traditional Menorcan sandals known as avarcas, all manner of rope and string, baskets, fertiliser, pet food, rifles, fireworks and quite a lot more stuff essential to the traditional way of life on the island. I asked the shopkeeper how old the shop was. “Nearly 200 years,” he replied. “It’s our anniversary next year, 2015.”

It turned out I was talking to Llorenç Escudero Carreras, who is the sixth generation of his family to run the shop. A softly-spoken man with a kind face, he told me that his family had also lived all that time in the house, which rose up through several storeys as well as sprawling inwards. “Parts of the house are much older than 200 years too,” he said. I wondered how business was. “Everyone’s been affected by the recession,” said Llorenç, “and it’s particularly tough for traditional shops. Even though horses are a crucial part of the culture here in Menorca, people have had to cut down on what they spend, which has affected us a lot.”

Llorenç told me that there was an interview with him in that day’s local paper, Es Diari, which I read later in one of Mahón’s many cafés. The interviewer, Juan J. Quetglas, reminded him of the day Miquel Barceló, who is one of Spain’s most renowned artists and is from Mallorca, dropped into the shop and advised Llorenç to keep everything just as it was.

Tourism is so crucial to the economy of Menorca and I really hope the local authorities support traditional businesses like this. Visitors love independent, family-run shops with an interesting story behind them. Talking to Llorenç gave me a brief insight into life in Menorca and experiences like that really make travelling worthwhile.