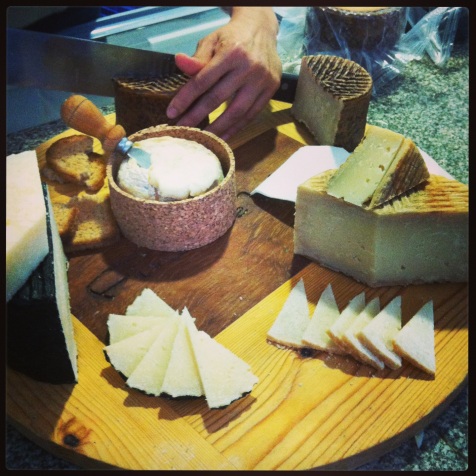 Patting the nose of a large, inquisitive pig, cuddling a wriggly kid goat and talking to a bemused cow on a sunny winter’s morning is a pretty good way to start the day, I must say, particularly when this is followed by eating rather a lot of excellent cheese.

Just outside the village of Uga in the south of Lanzarote, the Finca de Uga is a dairy farm where the welfare of the animals is all important. When I visited, the Jersey cows, Canarian black pigs, Majorera goats and Canarian sheep certainly looked pretty content and well looked after, with plenty of room to roam around. Cheese is produced all over the Canary Islands and there are around a dozen producers on Lanzarote, nearly all small operations. The Finca de Uga makes 15 different varieties, which are sold in gourmet shops and are used in the best restaurants on the island. The milk is not officially organic but is processed as little as possible to maintain both quality and flavour.

I could hear the goats and sheep bleating and a cockerel crowing as I walked up the path to meet Arminda, a vet who is from Lanzarote and came to work on the farm after studying in Bristol. She clearly loves her job on the farm. ‘Most of our cheese is made with raw milk, which means it has to be good quality,’ she explained. ‘We make around 24,000 kg a year, some of which is exported to Madrid and Europe.’

Arminda said that the Jersey cows produce only around 15 litres of milk a day, but it is 5% fat, which is higher than other breeds and makes it much better for making cheese. Some of the 15 varieties at Finca de Uga are made from just  goat, cow or sheep milk, while others mix two or three kinds together. My favourite was Bodega, their most mature cheese, made from goat and sheep milk with pimentón (Spanish paprika), the quality of which was recognised at the World Cheese Awards. Vulcano was great too, a mix of cow, sheep and goat milk that had been matured for seven months. Alegranza was lovely, a pure goat cheese, matured for a minimum of three months. And then there was Delicia Jersey, with milk from those happy cows, that was really mild and creamy and smelt like butter, matured for just 21 days.

The farm is currently not open to the public, although they do get visits from school groups, but the plan is to start tours for tourists soon and set up a shop. A way you can visit is to sign up for the Kilometre O event that is held on the last Saturday of every month by the Princesa Yaiza hotel in Playa Blanca, which includes a visit to Finca de Uga and a meal using produce from the island at the Isla de Lobos restaurant.

Armanda wielded her huge knife once more and gave me a triangle to taste. It tasted a bit like Gruyère. ‘This is another cow cheese and is one year old. It’s just an experiment at the moment and doesn’t have a name yet. We are always trying new things,’ said Arminda.  By this time I was mentally pairing the different varieties with wines – something which is also made on Lanzarote funnily enough. 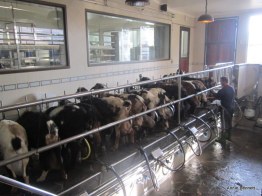 See Lanzarote Tourism for more information on the island.