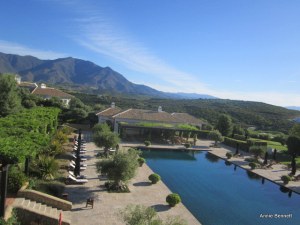 Tons of space. Loads of light. Natural materials. No gimmicky nonsense. The Finca Cortesin is certainly luxurious – and is regularly rated one of the best hotels in Spain – but steers clear of glitz and any sort of look-at-me showoffiness. It is at the western (posh) end of the Costa del Sol, just beyond Estepona and near Sotogrande, but set back from the coast in the hills below the hilltop white village of Casares. When I  arrived, I was invited to go and sit on the terrace and have a glass of cava, fino,  beer or whatever I fancied, with some tapas, straightaway. Nice touch, as it gets you into the Andalucian vibe from the minute you sink into one of the comfy chairs in the shade of ancient olive trees.

Happy as I was there, eventually I managed to slope off to my room – sorry, suite. There are no normal rooms here, just 67 suites, each a bit different, and ranging from around 55 m2 to 200 m2, with high ceilings too.  I was in an executive suite, which is the second category, between the junior and pool suites (which do indeed have their own little pool on the terrace). I’m not keen on the naff, meaningless adjective ‘executive’, and actually it’s a bit surprising that they use it, as the best suite is just called the Cortesin, with non of that ‘Royal’ or ‘Presidential’ pretentiousness you usually come across in five star hotels.

Anyway, number 16 is on a courtyard alongside the main building. You’d swear this was a fancy conversion of a traditional Andalusian estate, but the whole complex was built five years ago – apart from the original farmhouse which is still in the vast grounds somewhere. Suite 16 is huge. An entrance hall gives onto a living room, complete with sofa, dining table and chairs and a large desk. It was good to see not only a complimentary bottle of water but also a generous basket of fresh fruit and some lovely chocolatey lollipops stuck in a flower pot – and fresh flowers too. 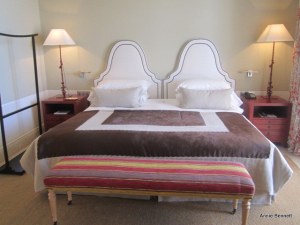 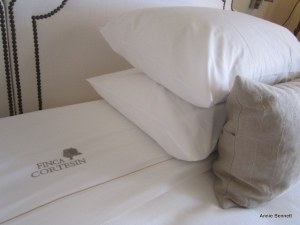 The bedroom is nice and spacious too, with a 220 m bed (two singles together) with a Flex latex spring mattress, Egyptian cotton sheets with a no doubt stratospheric thread count and massive pillows of varying squashiness. My only gripe was that there is no handy socket by the bedside table for charging your phone when you need to use it as an alarm, but I’m sure that will be rectified soon.

I think I’ve lived in flats smaller than the marble bathroom, which had a separate shower with rain and handheld showerheads. Toileteries are the lovely Penhaligon Blenheim Bouquet and I was pleased to see the 100 ml bottles rather than the tiny ones, which I always think looks a bit mean. There was a salon-standard hairdryer, a make-up/shaving mirror and adjustable lighting to get the mood just right. Not that I’m ever in a hotel long enough to worry about mood setting, but I’m just saying. 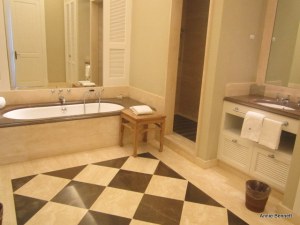 And then there was the terrace, which ran the length of the suite. Enormous. Ideal for a drinks’ party for about 30 people. With a fab view of one of the pools and beyond across the countryside to the mountains and the Mediterranean, depending which way you looked. There was a lot to see, what with one thing and another, as I inhaled the fragrance of the jasmine wafting up from below. 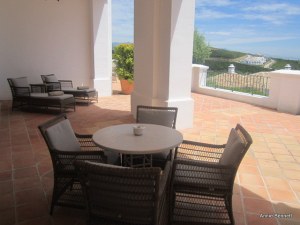 Internet connection was dead simple with no need to enter a code, a fast signal and  no extra charge – why can’t all hotels manage that? I was surprised that there was no coffee machine or kettle, but apparently these are available on request, as are iPod docks and whatever other gadgetry you can’t live without. They don’t like to clutter the rooms up with stuff people might not want, as the overall emphasis is on calm coolness. Or cool calmness. Or something – you get my drift. 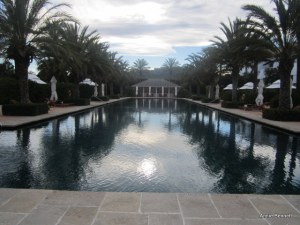 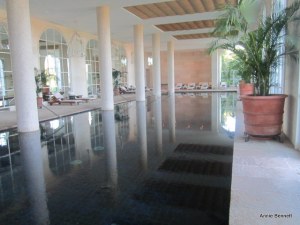 The pool that my terrace overlooked is 35 metres of glittering dark green tiles, surrounded by loungers with a shady bar and restaurant at one end. They don’t like that bright turquoise look here. So vulgar darling! A short stroll through the gardens brings you to another pool, even bigger at 50 metres. This one has a more discreet vibe, with daybeds to sprawl on, and a no-kids policy. Children are made very welcome at the hotel though, and indeed there were some very well-behaved, chic French kids there during my stay.

There is another, 25-metre, saltwater, unchlorinated pool in the spa, this time with midnight blue tiles, with light flooding in through the arched windows forming one wall. I expected this to be a dread ‘circuit’, but there was no bubbling yourself to death here, just a few people swimming elegantly up and down. As I usually swim most days, I was thrilled by these beautiful, long pools. And there was yet another one! The hotel has a rather cool beach club too, with a shuttle service to run you down there. 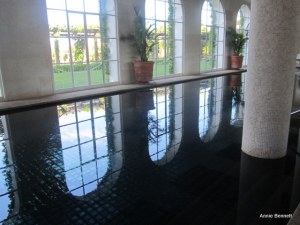 I didn’t have time to wallow in the spa, but there are male, female and mixed areas, with an intriguing ‘snow cave’ – a space full of snow – to roll in after the sauna or steam room, which are both really spacious. No time for a massage or any of the other treatments either – damn. There is a large, light-filled gym too, which looks more like an actual, proper, well-equipped gym, rather than the smelly cupboard arrangements I come across all too often.

The golf course is very highly regarded by people who know about these things – not me, obviously – and regularly hosts the Volvo World Match Play Championship, which my golfing friends tell me is very impressive indeed. They also can’t believe I stayed at the Finca Cortesin and didn’t play golf.

So what about the food? Let’s start with breakfast, usually served on the terrace. Glory hallelujah, no buffet! I am not a fan of huge breakfast buffets; can’t cope with that much decision making before I’ve had at least two coffees. So, you install yourself at a table and orange juice (freshly squeezed obviously), pastries, yogurt , muesli and various other bits and bobs are put down in front of you while you have a look at the menu and decide on, maybe, eggs benedict and a fresh fruit platter. And perhaps a carrot, apple and ginger juice a bit later on. It is all very civilised indeed and you could well find yourself still there as lunchtime approaches. 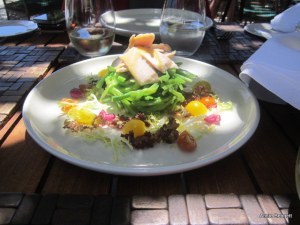 Talking of which, I had a wonderful lunch by the pool, prepared by Lutz Bösing, the chef in charge of El Jardín, the hotel’s Spanish restaurant. Lutz serves delicate, tasty, Mediterranean cuisine, always beautifully presented. Lutz is really passionate about his food and is more than happy to explain how he has prepared his dishes. I had porra antequerana (a thicker version of gazpacho), a salad, superfresh red mullet and a really tasty paella – lovely traditional Andalusian food, beautifully prepared and served.

I had a superb dinner outside at El Jardín (where breakfast is also served), which included a courgette carpaccio with violets, pine kernels and Belper Knolle cheese. I hadn’t come across this before, but Lutz said that it is a cow’s milk from Switzerland, with a hard texture that is particularly good for grating. It was a beautiful dish. Another standout course for me was the lobster gazpacho with grapefruit, chilli and sweet lemon – a variety grown locally which, amazingly, actually does taste sweet.

I was actually at the Finca Cortesin to try its new restaurant, Kabuki Raw, which I have written about in a separate post. I didn’t try the Italian restaurant, Don Giovanni, which is run by Andrea Tumbarello, whose Madrid restaurant is regarded as one of the best Italians in the city. A good proportion of the diners at the restaurants are not staying at the hotel, so there is usually a much buzzier atmosphere than you experience at a lot of high-end hotels.

You can also eat at the golf club and the beach club, and the Blue Bar serves great cocktails and other drinks in various spaces around the hotel. I really liked the two indoor/outdoor chillout areas, one of which has a Moroccan vibe with deep red tones, and the other with a light, Mediterranean décor in yellow and white.

The hotel is a short drive from Estepona, where I had a great meal at La Escollera, a no-frills place right by La Lonja, the fish auction building on the quayside. A complete contrast to the exquisite cuisine at the Finca Cortesin, this was all about the freshest seafood wth no messing about. I had prawns, squid, clams and a couple of cold beers. Perfect. I had another lovely lunch – and a real bargain at around €20 a head – at the Venta García, which is a few minutes’ drive up the hill from the hotel. Run by the ebullient Juan Jesús, the restaurant serves delicious Mediterranean food in a surprisingly stylish and well-designed room with sweeping views down the valley.

You could also do trips to Ronda, Malaga, Marbella, Gibraltar or Jérez, or do a tour of the white villages in the hills, or head along the coast to Tarifa and the fabulous beaches on the Costa de la Luz. Or of course you could just stay put and do nothing at all except waft around the gardens smelling the roses, stopping off to sip a Martini and slip into one of the pools every now and again.

It would be lovely to stay at the Finca Cortesin for a fortnight, if not a month. The only hitch would be the expense, as rates start at around €450.  It is of course a lot of money, but the standard is head and shoulders above most five-star hotels in Spain. It would be ideal for a long weekend for a special occasion. You can get there in under an hour from Malaga or Gibraltar airports too. 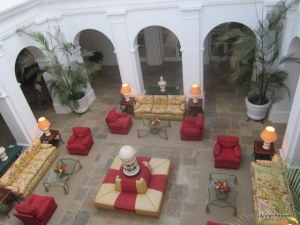