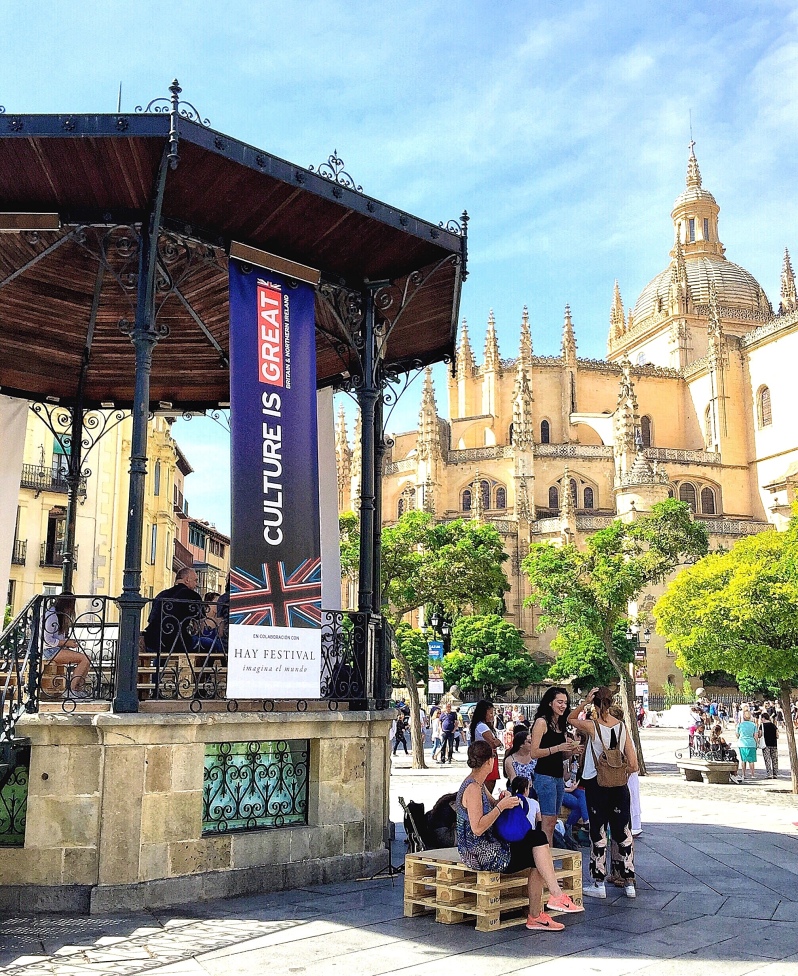 The Hay Festival is on in Segovia over the weekend of September 19th to 22nd and as always there is a packed programme of talks by writers from all over the world as well as concerts, exhibitions and no doubt quite a lot of drinking wine at the pavement terraces in the Plaza Mayor and dancing in the streets too.

On Thursday, September 19th, the pianist and author James Rhodes is appearing at the Teatro Juan Bravo on the Plaza Mayor. Rhodes has been living in Madrid for the last four years and keeps his fans up to date with his life in the Spanish capital with his exuberant, enthusiastic posts on Twitter. He will be talking to El País journalist Jesús Ruiz Mantilla about his troubled upbringing, his highly successful musical career and the happiness he has found in Spain.

On Friday 20th, Vicente Molina Foix, one of Spain’s most important novelists, is comparing the literary scene of the 1980s with the current situation with writer José Ángel Mañas and publisher Idoia Cantolla. Also on Friday, the poet, playwright, performer and designer Inua Ellams is interviewed by Hay Festival founder Peter Florence, and leading artist Marc Quinn talks to GQ editor Dylan Jones.

These events take place at the main festival venue, the Santa Cruz La Real monastery on the banks of the Eresma river, which is now part of the IE University (Instituto de Empresa). The building, which has National Monument status, was founded in the 13th century by Saint Dominic who, appropriately, believed that words were more powerful than weapons and is often depicted holding a book.

The most enchanting festival location, however, is the Romeral de San Marcos, a lush garden farther around the Eresma river, opposite the fairytale Alcázar castle. Set on a steep slope on the side of a gorge, it was created by the artist and landscape gardener Leandro Silva, who also restored the Botanic Garden in Madrid. During this event, writers and guests read from their work, or from texts they have chosen, in different parts of the garden. The audience – usually around 60 people – move along the narrow paths that wind up the hillside in the shade of quince, plum and pear trees. This year’s readers include the top literary agent and Hay Festival chair Caroline Michel and the newly-appointed British ambassador to Spain, Hugh Elliott.

Elvira Lindo, Antonio Muñoz Molina, Soledad Puértolas, María Dueñas, Fernando Aramburu, Carmen Posadas and Fernando Savater are just some of the leading Spanish writers who are at the festival this year. Other highlights include the architect Amanda Levete, whose designs include Lords cricket ground, James Ellroy and Madrid-based food historian and writer Vicky Hayward, who is talking to the bestselling author Boris Izaguirre about The New Art of Cooking, her retelling of the classic 18th-century book by Juan Altamiras, which has won several prestigious awards both in Spain and in the UK.

The unusual thing about the Segovia festival is that events take place in different venues, from churches to concealed courtyards, which means you experience the city in a very different, more intimate way than you would if you were just visiting as a tourist. Getting to all these places means that visitors to the festival spend a lot of time scuttling up and down the hills of the town, finding shortcuts down secret passages, ramshackle steps and overgrown paths, making new discoveries along the way. It is all part of the unique experience that is Hay Segovia.