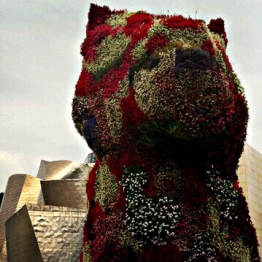 Twenty years have gone by since Frank Gehry’s startling Guggenheim Museum opened in Bilbao in October 1997. I first saw it at the beginning of December of that year, when a bank holiday created a long weekend and people from all over Spain grabbed the chance to see the shimmering titanium structure for themselves. It was snowing that weekend, the shops were shut because of the holiday and of course Bilbao was a very different place then. I remember thousands of underdressed visitors wandering around in the snow, looking for something to do.

I failed at my first attempt to get into the museum as the queue was snaking across the concourse and down the street. When I actually made it inside the next day, I found a scene more reminiscent of the first day of Harrods sale than the usual hushed atmosphere of a major museum. It was mayhem; packed with people who were mesmerised by the building but maybe wouldn’t usually go to a contemporary art museum and were somewhat baffled by much of the conceptual art on display. But this has always been one of the great things about the Guggenheim Bilbao: it attracts people for all sorts of reasons and is all the better for it.

The museum was the catalyst for a wave of urban regeneration that cities all over the world have tried to emulate. Over the last two decades, a steady stream of star architects have played a part in the remarkable transformation, including Norman Foster, Arata Isozaki, Zaha Hadid, Santiago Calatrava and Cesar Pelli.

The museum is on the bank of the Nervión river, which is now flanked by promenades and parks. Cross over Calatrava’s Zubizuri bridge to the opposite bank for the best vantage point and try to work out how the shiny, silvery chunks of the structure somehow look curvy and soft rather than jagged and rigid. The enormous spider sculpture by Louise Bourgeois is just one of the artworks to get you in the mood as you approach. In front of the main entrance, the gigantic floral Puppy artwork by Jeff Koons is almost as famous as the building itself.

Inside, exhibition areas swerve around a glass atrium with works by artists including Mark Rothko, Anish Kapoor, Anselm Kiefer, Jorge Oteiza, Jenny Holzer, Joseph Beuys and Mark Rothko, with an extraordinary installation of massive steel sculptures by Richard Serra. Temporary exhibitions this year include portraits by David Hockney, which opens on November 10.

The Nerua restaurant in the museum, where chef Josean Alija has a Michelin star, is one of the best in Spain. But if you don’t want to eat there, just stop for a glass of rioja or two – from the Rioja Alavesa in the Basque Country of course –  in one of the city’s many bars and you soon discover that the gastronomic scene in this city on the north coast of Spain is really rather spectacular. And then you start wondering why you’re not staying a bit longer.