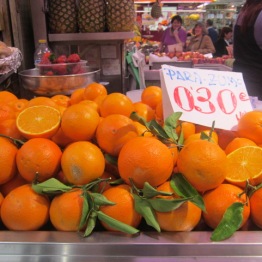 Orange groves flashed by in a blur as the sleek white train whizzed westwards out of Valencia towards the plains of La Mancha at the start of my journey across Spain to Seville. It might sound like an epic undertaking, but I was on a high-speed AVE train and would be in the capital of Andalucia –  nearly 500 miles away –  in less than four hours.

AVE stands for Alta Velocidad Española – Spanish High Speed – and 2017 is the 25th anniversary of when the route started operating to take people – including me – from Madrid to Seville when the Andalucian capital was hosting the World Expo in 1992.

This was the first leg of a trip using the Spain Pass, which makes travelling around the country cheaper and easier for visitors. The pass is issued by Renfe, the Spanish rail network, and is valid on AVE high-speed services and other long and medium distance trains, which are a similar standard but not as fast. It is valid for a month and you can choose to take between four and 10 journeys.

My train had departed at just after eight o’clock in the morning from Valencia’s swish Joaquín Sorolla station, built when high-speed trains started operating to the city at the end of 2010. I couldn’t help feeling a bit disappointed, however, not to be leaving from the glorious art nouveau Norte station, where the walls and ceilings are covered in sensuous ceramics featuring the flowers, fruit and vegetables that grow so abundantly in the plains around the city.

Half an hour later we were hurtling through the vineyards of the Utiel-Requena area in the dewy morning light. I was dreamily humming La donna è mobile from Rigoletto, which I had seen the evening before at Valencia’s sculptural opera house, the Palau de les Arts, which is part of the spectacular City of Arts and Sciences. While the parabolic arches and fragmented tiles of the glittering white complex are evocative of Gaudí, the architect, Santiago Calatrava, is also recalling the opulence of Norte station and the optimism of a century ago when the railway was a symbol of a flourishing future.

We left the vineyards behind and the train snaked across an empty landscape of gently undulating hills. Silvery olive trees shimmered in the mist and the concrete bridges framing the rails looked strangely natural against the soft ochre backdrop.

At nine o’clock, we pulled into Cuenca station in dense fog. I was hoping to catch a glimpse of the ‘hanging houses’, which seem to spill over the edge of the limestone ridge on which the town is built, but visibility was down to a few yards and I later realised that the station is too far from Cuenca to see anything anyway. Many of the new stations built for the high-speed routes are actually several miles outside the towns and cities they serve.

Now we were crossing the vast russet and mauve plains of La Mancha, with only the odd farmhouse or hamlet scattered across the terrain. After travelling for two hours since leaving Valencia, I was brought rudely back into the 21st century as we trundled through an industrial estate outside the town of Ciudad Real. We were now heading south and were soon crossing the invisible frontier into Andalucia, entering a series of tunnels hewn through the craggy hills.

As we approached Seville, the track was flanked once again by orange  groves. At midday – five minutes ahead of schedule – the train pulled into Santa Justa station. I remember interviewing the architects, Antonio Cruz and Antonio Ortiz, in their shiny new creation back in 1992. It felt a bit empty back then, but things are much busier now; the AVE network continues to expand, and you can now travel the 700 miles from Seville to Barcelona in five and a half hours. 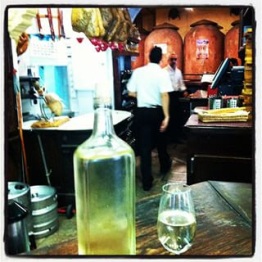 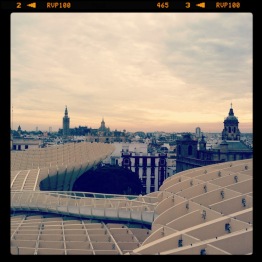 Within half an hour, I had dumped my bag at the Hotel Adriano  in the centre of the city and was sitting on a stool with a glistening glass of fino sherry and a plate of ibérico ham at a traditional bar with tiled walls and high decibel levels. I was happily sliding straight into the swing of this most beguiling of cities.

That evening, I was at the opera again, but it could not have been more different from the night before in Valencia – which seemed like a very long time ago. I walked down the street from the hotel to the Arenal food market and entered a secret room at the side which had a bar and a couple of dozen tables. This was Sevilla de Ópera, which  offers people the chance to see highlights of operas at reasonable prices. There were two singers, performing extracts from some of the many operas set in the city, including Don Giovanni, The Marriage of Figaro and The Barber of Seville. Eating fat olives and sipping an icy Cruzcampo beer, with the singers just a few feet away,  I was falling under the always intoxicating spell of Seville.

By the next afternoon, however, I was back at Santa Justa, putting my bag on the conveyer belt to be x-rayed – security is pretty tight on the AVE network – and boarding the train for Madrid.

Forty minutes after leaving Seville, the train arrived in Córdoba, the only stop on this journey.  I rather wished I could get off and lose myself in the winding cobbled lanes for a few hours, but a couple of minutes later we shunted off again and were soon speeding through a landscape of olive and holm oak trees, punctuated by white cottages and Moorish watchtowers on the hilltops.

During the journey between Seville and Madrid, it was really striking how little of the country between the capital and the third-largest city in Spain is built on at all. I was jolted back into urban life by the appearance of the odd factory, swiftly followed by rows of red-brick apartment blocks on higher ground up ahead, that heralded our arrival at Atocha station in Madrid, two and a half hours after leaving Seville.

While the terminal for AVE trains, designed by Rafael Moneo, was built for the new route in 1992, the original brick and ironwork structure, dating back to the end of the 19th century, has been turned into a vast hothouse with towering palms, tropical plants and pools full of terrapins where the platforms once were.  It is not unusual for travellers to get so absorbed watching the creatures paddling around that they completely forget to catch their trains.

After a quick change at the Only You Atocha hotel right opposite the station, I was scuttling through the narrow streets of the Barrio de Las Letras, where Madrid’s first theatres emerged in the 16th century, to the Teatro de la Zarzuela to see a performance of Gaztambide’s El Juramento. The elegant theatre, the home of Madrid’s own form of operetta, was quite a contrast to the market in Seville and the futuristic opera house in Valencia, but was unmistakably Madrilenian.

Travelling by train, seeing the landscape slowly change, gives you time to absorb your experiences in each place and you arrive ready for whatever your next destination has to offer. My pass was only for four journeys this time – I was planning to continue to Barcelona and then return to Valencia – but my mind was already whirring, working out a route around the country using the 10-journey pass. What a wonderful way to explore the different regions of Spain that would be.

How to buy the Spain Rail Pass

The ticket is available from Renfe Spain Pass and Rail Europe. You can also get it at stations in Spain and at Spanish travel agencies. Ave Experience offers pass and hotel packages, as well as gastronomic and wine tours.

How much is it?

The pass is valid for one month, starting from the first journey you take, rather than the date of purchase. Once you have your pass, you just need to make an online seat reservation on the Renfe website for the train you want at no extra charge. You can board the train by displaying your booking on your phone, so there is no need to print it out. You can also book your seats at stations or travel agencies.

Do you save much compared to buying individual tickets?

If you did my four journeys buying normal tickets, starting with Valencia to Seville, then Seville to Madrid, Madrid to Barcelona and Barcelona back to Valencia, it would cost around €250 – fares vary according to when you travel and how far ahead you book – compared to €195 for the four-journey pass. Obviously, the savings are greatest if you do the longest journeys, such as Barcelona to Seville or Malaga.

The pass entitles you to discounts at some museums, as well as a tourist card in some destinations.

If you have a Preferente pass, you might be served drinks, snacks or a meal, depending on time of travel – although Renfe has really cut down on these perks. You can also use lounges with free refreshments at major stations.

If you have a standard pass, you can upgrade to Preferente for any journey when you make your seat reservation.

Don’t cut it too fine at major stations – particularly Madrid and Barcelona – where the queues for security screening often mean you really do need to heed the official advice to be there at least 30 minutes before departure.

Avoid travelling at peak times if you can. As well as early mornings and early evenings, trains often get busy from late afternoon on Fridays and  Sundays, so don’t leave it until the last minute to make a reservation.

Have a look at the Spanish tourist board website for more ideas and see The Man in Seat 61 for comprehensive – and easily comprehensible – information on travelling around Spain by train.

What to read on the train

Jason Webster’s novels featuring the detective Max Cámara give a great sense of Valencia. Start with Or The Bull Kills You (Vintage). On the way to Seville, read The Seville Communion (Vintage) by leading writer Arturo Pérez Reverte or The Blind Man of Seville (Harper) by Robert Wilson. Get in the mood for Madrid with The Infatuations (Hamish Hamilton), the intriguing novel by Javier Marías.  Or you might prefer to dip into Madrid Tales (OUP), edited by Helen Constantine and translated by Margaret Jull Costa, which contains a story by Marías. Or try Leaving the Atocha Station (Granta) by the American poet and writer Ben Lerner. Get inspired for more train journeys around Spain with The Train in Spain (Bloomsbury) by Christopher Howse.

The welshcake production line at Swansea market this morning (just for you @sallydaviesbarcelona ). Named best large indoor market in the UK last week! #swanseamarket #swansea #welshcakes
Spring on the Wales Coast Path at Mumbles Pier. The steps lead up to the point where the Gower península starts. . . #Mumbles #Gower #walescoastpath
Thanks @trottaroundswansea for bringing these lovely bars of dark chocolate with wrappers by local artists back from Paris. *Almost* too pretty to eat... #chocolate #artisanchocolate
Cherry sundaes 🍒 and americanos at Joe’s Ice Cream Parlour in Mumbles with @trottaroundswansea and @justlewis70
Not a tapa - prawns in tempura ‘starter’, £5.95. Chips and champagne extra. 🦐🦐🦐
Very impressed with this gentleman in his classic Spanish cape - no doubt from @capas_sesena - in the queue for traditional Christmas sweets and biscuits #Madrid
%d bloggers like this: