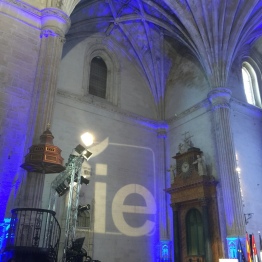 Around this time of year, my mind always starts wandering to Segovia and what will be happening at the Hay Festival Segovia 2016 there in late September. This year it is taking place from Thursday 22nd until Sunday 25th -although, as usual, there will be things going on in the couple of weeks running up to the main weekend, with the official opening events on Saturday 17th.

This is the 11th year that the book festival has been held in beautiful Segovia, in the Castilla-León region north of Madrid. Although Hay now holds festivals in various farflung parts of the world, what makes this one really special is that the events are held in historic buildings – including palaces, churches, monasteries and theatres – throughout the small, elegant city.

The programme is already filling up with interviews, readings, concerts and exhibitions. This year the festival will focus on the 400th anniversary of the death of Cervantes and Shakespeare – and also Inca Garcilaso de la Vega – as well as the transformational power of words and the ritual of public reading. That all sounds a bit serious but I’m sure there will be a lot of fun in there too.

Who is on the bill this year?

Events are still being added, but we’ve got plenty to look forward to so far, such as Marta del Riego interviewing John Banville about his novel The Blue Guitar and the crime books he writes under the pseudonym Benjamin Black.  Adam Foulds will be talking about his new novel In the Wolf’s Mouth and Deborah Levy is discussing Shakespeare and Cervantes – and no doubt a lot more – with Peter Florence. Julie Christie will be there too, as well as the Peruvian tenor Juan Diego Flores and Hannah Rothschild, the author, documentary filmmaker and chair of the board of trustees of the National Gallery.

On Sunday 25th, Duncan Campbell and Lorenzo Silva will be on stage in the grand setting of the Aula Magna of the IE University Segovia – housed in the Santa Cruz La Real monastery – to talk about crime, fiction and how the two sometimes overlap.

The Workshop of Dreams

This is a fascinating project led by Martha Thorne, who is Dean of the IE School of Architecture and Design and Executive Director of the Pritzker Prize. The scheme, in conjunction with the American Hardwood Export Council, has teamed architects and designers with figures in various creative fields. The result is a series of wooden sculptural works, inspired by  chefs Juan Mari and Elena Arzak, paleoanthropologist Juan Luis Arsuaga and writer Javier Cercas.

India is the guest country this year. It is India Year in Spain to commemorate the start of diplomatic relations between the two countries 60 years ago. Speakers include the renowned jourmalist Dileep Padgaonkar, the former editor of The Times of India who now sits on its board. Also appearing is the writer, publisher and literary festival director Namita Gokhale. On September 23rd, Kiran Nagarkar, Sethu and Anuradha Roy are discussing contemporary Indian culture with Peter Florence.

I’ll be keeping an eye on developments to the programme over the next month and am really looking forward to being back in Segovia.