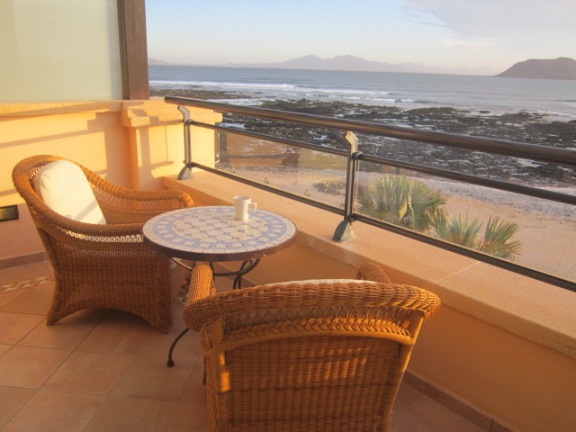 I love hotel rooms that are right by the sea, where you go to sleep and wake up to the soft sound of the waves, so I was very happy indeed with room 352 – a double deluxe sea view – at the Atlantis Bahía Real in Fuerteventura in the Canary Islands. The five-star hotel is right on the beach in Corralejo in the north of the island, which is in the east of the archipelago, just below Lanzarote and about 100 km from the coast of Africa.

I’d ended up at the Atlantis Bahía Real a bit by chance. After a long day exploring the island, I’d got back to the place I was staying around eightish, to be told for reasons I won’t bore you with that I was switching hotels. I wasn’t complaining as I’d wanted to stay there for years. It was just a shame to get there in the evening and leave the next morning, which meant I didn’t have time to see all the facilities never mind try them out. Story of my life. Anyway, this is going to be rather a brief overview as I obviously wasn’t there long enough to get a proper impression.

It’s about classic design here, with the easy-on-the-eye colonial style you come across throughout the Canaries. There is a hint of the Alhambra in the mix too, particularly in the tiling. Room 352 – there are 242 rooms and suites – is smart and decorated in warm, natural tones – others are in blue hues. The sleek white seaside look that is taking over beach hotels in Spain has crept into the very swish Coco Beach bar/restaurant/lounging area, which is the newest part of the hotel. The pavilion-style structures are built on jetties over the sea and are very chill-out chic, so there’s something to keep the more hipster guests happy too. Talking of guests, it was a real mix when I was there: all ages, couples, singles, families and groups of friends. 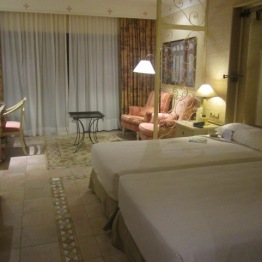 As this isn’t a dread ‘design’ hotel, there is actually plenty of space to sit in the rooms, with unfashionable things like comfortable chairs – not that I actually spent any time sitting inside.  As I was tragically only there for one night, what little spare time I had was spent slumped in the wicker chair on the terrace, gazing out across the ocean to Los Lobos island and Lanzarote beyond. There are worse ways to spend the odd hour.

The kingsize bed was lovely, with high-quality cotton sheets, the hairdryer was great and the hotel-branded toiletries were fine and plentiful. The large wardrobe actually had some drawers, which is something to be grateful for, but I had a fit of the heebie jeebies as usual at the sight of detachable hangers in a five-star hotel. I am not going to steal your hangers. Or anybody else’s. Ever. Honestly.

The food was excellent in the attractive main buffet at both dinner and breakfast and you can sit outside, with waiter service for drinks, so you feel like you are eating in a proper restaurant. There was a wide range of local and international dishes at dinner, with a lot cooked in front of you. There was really good labelling too so coeliacs, vegetarians etc. – and everyone else come to that – can see what things are without having to ask a million questions.

I wasn’t there long enough to try La Cúpula, which is overseen by the legendary Michelin-starred chef Carles Gaig from Barcelona, or the Yamatori sushi and teppanyaki restaurant. There are various other spaces for eating and drinking too, so you wouldn’t get bored if you were there for a fortnight and a gin and tonic would never be far away.

There is a sumptuous spa, which will have to wait for another, more lengthy visit as well. I did have a swim before breakfast in one of the outdoor pools though, where you could while away all day sipping cocktails on a sunbed in the shade of the palm trees. I believe that is what normal people do on holiday. 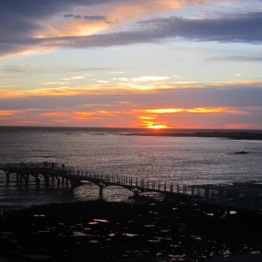 Rates at the Gran Hotel Alantis Bahía Real start at around €200 including breakfast.

See Visit Fuerteventura for more information about the island.