La Fábrica, which opened in June 2014, is a really interesting place. It is owned by chefs Curro Noriega and Mario Ríos, who also run Besana Tapas in the small town of Utrera, south-east of Seville, where we were planning to have lunch the following day. Besana had been on my radar for a while and I was reminded of it in February at the Madrid Fusión gastronomic congress. While there, I saw the winners of the 100 Best Restaurants in Spain 2015, a list chosen by a variety of gastronomic experts to try and get away from the usual awards that only deal with top end places. While there were big names on this list, the 11 categories allowed for a wider variety of establishments to be recognised, including places specialising in such things as ice cream, grilled meat and fish or rice dishes. It was a really fascinating list with quite a few places I had never heard of. Besana Tapas featured in the Tapas, Gastrobars, and Market Stalls section. In other awards, it has also been named the best tapas bar in Andalucía and one of the top ten in Spain – quite an accolade these days.

La Fábrica has a sort of vaguely vintage industrial look with reclaimed furniture and the nowadays inevitable mismatched chairs. All very Shoreditch, until you look at the menu – and the incredibly reasonable prices. I saw there was a section titled Carta de Cuaresma – Lent menu – something I hadn’t seen before. “It is actually quite common here for places to offer menus with local specialities that are meat free during Lent,” said my friend Shawn Hennessey of Sevilla Tapas Tours.

Mario emerged from the kitchen and explained to us how he and Curro organise running the two bars. “One of us is always in each place. Curro lives in Utrera and I live here in Seville, so it is usually easier this way around, but we do switch about. Curro and I are both chefs – we don’t know how to do anything else! Although actually we both teach cookery at catering schools in the mornings too.” They are staunch defenders of the tapas concept, using much the same locally-sourced ingredients as in traditional bars, but have incorporated a highly creative element. “Above all we are doing a very personal thing here and in Utrera,” said Mario. “We are just making the food we want to cook.” 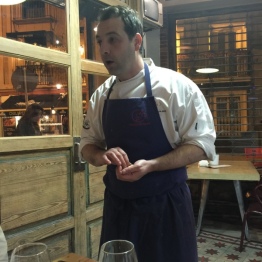 A plate of marinated salmon appeared on the table along with the different glasses of wine we had chosen: Lagar do Castelo Albariño from Galicia, Pitacum from El Bierzo in León and Trus from Ribera del Duero. Mario brought us morrillo de bacalao, a chunk of cod from the back of he head of the fish. “The parts in or around the head are always the tastiest and juiciest,” he said. It was served with a pilpil sauce with black trumpet mushrooms on potatoes with brown butter. A very sophisticated – and delicious – dish indeed for €4.50.

Mario next brought us something called tagarninas, which I have since discovered is Spanish oyster thistle – not sure how helpful that is. This was a Lent dish. “You use it in soups and stews, like nettles. This dish today is my version of  tagarninas esparragadas, with poached egg, which is very traditional.” We also had a fish called borriquete, which apparently translates as rubberlip grunt – not that I’m any the wiser. “It is a rock fish,” Mario explained. “It came in this morning from Conil, down on the Costa de la Luz, where there is fantastic fish. It is very white with firm flesh. I’m serving it today with a mint tabbouleh and a sweet and sour squid sauce with orange peel and cinnamon. It isn’t on the menu, I’ve just come up with it now.”  It was really amazing to be eating food of this standard in such a laidback setting with no fuss or kowtowing waiters I must say. Our bill, for four shared dishes and a couple of glasses of wine each, was €37.40. 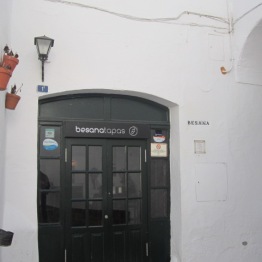 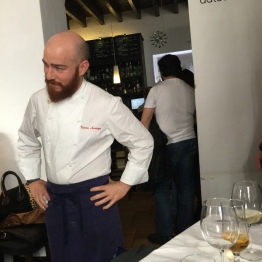 The next morning, it was a bit of a wrench to leave the city on a gorgeous sunny Sunday, but we stuck to our plan to head down to the small town of Utrera, about 30 km away in the province of Seville. Although it barely features in guidebooks, there are some interesting churches, a castle and quite a few grand mansions there, which kept us amused until it was time for lunch.

Besana Tapas (Niño Perdido 1) is just off the main square, hidden away down an alley in the former Jewish quarter – not really where you would expect to find one of the best tapas bars in Spain. It is in a traditional whitewashed building with not a lot of space – a bar, some high tables with stools and a room with half a dozen tables. On that Sunday lunchtime it was absolutely packed. I spotted Curro Noriega, busy in the kitchen, as we walked through to the table.

Looking at the menu, I saw that a few dishes were the same as at La Fábrica – cleary favourites that people come back for time and time again. There were specials too and a Lent menu, which featured the tagarninas esparragadas we had eaten the night before, and also some rather surprising things such as udon noodles with king prawns and charred garlic, and kimchi gazpachuelo, which is a soup typical of Malaga province, usually made with fish stock, egg, garlic and oil. On the main menu there was baby squid stuffed with Catalan butifarra sausage and  a burger with gorgonzola inside.

We had a delicate brandada de bacalao – salt cod brandade – with tapenade, from the Lent menu. From the specials menu, we had a very tasty round croquetón in a creamy mint sauce, hake with artichokes and a pork knuckle raviolo. I’d like to have tried a few more things too, such as the lamb pionono pastry – which I have only had with sweet fillings before – with a palo cortado sherry and curry tomato sauce. With such intriguing – and delicious – dishes it is easy to understand why it has earned so many plaudits. 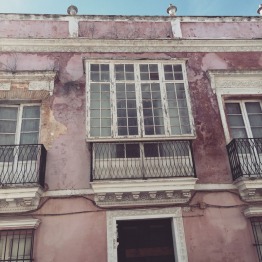 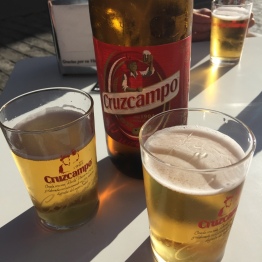 We walked back to the square and bought the local mostachón cakes, then found a shady table to eat with them with a café con hielo –  coffee poured over ice cubes. Unlike a lot of small towns in Spain on a Sunday afternoon, it was really lively, with families and groups of teenagers milling about. I later read a great post about Utrera by my friend Kate Turner on her blog Oh Hello Spain, about how people here are rather fond of going for a few drinks during the day as well as at night.

That is a custom we could see ourselves slipping into all too easily. After another short stroll, we grabbed a table at another pavement café, thinking that a nice cold beer would go down rather well. Luckily there was no need to rush, even though we were flying to London that evening, as the new British Airways flight from Seville doesn’t leave until nine on Sundays, so you can make the most of the day. We ordered another beer. It had been quite a weekend, after all.

How to make this Seville weekend happen

Have a look at Sevilla Tapas Tours for details of the different things on offer as well as tapas, which include flamenco and visiting markets. There is more information on all the places mentioned here and a lot of handy advice on the whole tapas thing in Seville. We Love Tapas offers shorter tours in Seville and Malaga.

Getting there  British Airways flies to Seville from London Gatwick – fares are often very reasonable if you can be flexible on dates.

Where to stay   The Fontecruz hotel has 40 pretty rooms around an elegant courtyard and has a very welcome outdoor pool. It is in a handy location with the cathedral and Santa Cruz on the doorstep.

Find out more  See Visit Sevilla and the official Spain tourism portal for more information. There is also a Visit Sevilla app with a useful gastronomy section with a list of tapas bars.