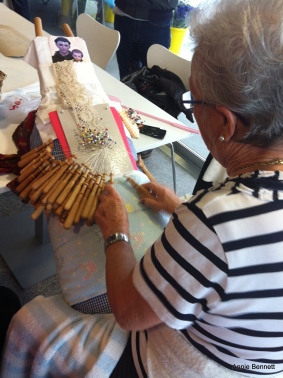 The first thing I heard when I arrived in Camariñas – apart from the squawking seagulls –  was a low, rhythmic rattling noise. This turned out to be wooden bobbins being shuffled at a frenetic pace to create the lace for which the area is famous.

Camariñas is the name not only of the fishing village where I was, but the adjoining estuary and peninsula on the Costa da Morte in the province of A Coruña in Galicia in the northwest of Spain.

The clacking I could hear was emanating from the lace museum, where a dozen young girls were lost in concentration as they deftly manoeuvred the dozens of bobbins in front of them to weave threads into intricate patterns. They come here after school apparently, some as young as five, to learn the skill that has been a tradition among the women in Camariñas for hundreds of years. It may date as far back as the 14th century, when there was a thriving trade between this part of Spain and other countries in Europe, particularly Flanders and Italy.

My knowledge of lacemaking was frankly scant when I went into the museum but I soon learnt that in Camariñas they make what is known as bobbin or pillow lace, which involves winding the thread around bobbins – a sort of reel or spool – rather than using needles.

With me so far? I will try and briefly explain how it’s done, but please bear in my mind that this is not my specialist subject so I am on dodgy ground and might well get it a bit wrong. Anyway, back to those bobbins… The lacemakers are called palilleiras and might use 150 pairs at once. The little girls I was watching were using around 25 pairs and that looked baffling enough to be honest.

They all use a rectangular pad with wooden handles, called an almohadilla (little pillow) as a base, hence the term ‘pillow lace’.  The pad is covered in fabric, usually gingham, and is stuffed with straw. A pattern card is attached to the pad and pins with different-coloured heads keep the pairs of bobbins required for each stitch in position. Then the work begins of twisting the thread around the appropriate pins at breakneck speed to form the design.  The palilleiras know exactly which bobbins to grab and which threads they have to twist around. As I was saying, totally mindboggling…

Traditionally, women used to meet in one of their houses to make lace together, a gathering known as a palillada. Before there was electricity, they worked by the light of carbide (acetylene gas) lamps and shared the cost between them. They would put a long wooden bench down the middle of the room to rest their pads on and sit cross-legged on the floor around it, chatting and singing folk songs as they worked.

The married women sat on one side and the single girls on the other. The local boys would turn up to court the girls and try to chat them up when they finished working. When a boy took a fancy to a particular girl, he would carve her name on a bobbin and give it to her. After a week or two, he would come back to see if she was using it. If so, it was a sign that she wanted him to continue with his advances.

Although women still meet to make lace in some villages on the Costa da Morte, the activity mostly takes place in community centres and associations. At Easter there is a lace fair, when people come from all over the world to take part in demonstrations, competitions and fashion shows. The traditional music and dance festival is on at the same time and there are guided tours and lots of other activities for visitors to get to know the area.

See the Camariñas tourism website for more information. I stayed at the Hotel Puerto Arnela in Camariñas, a traditional house by the harbour. Vueling flies to A Coruña from London Heathrow.