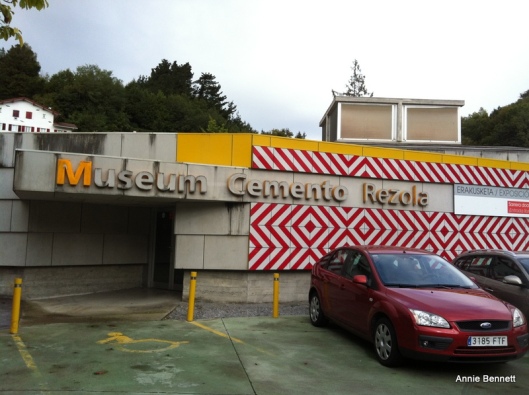 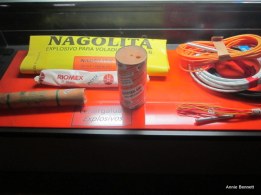 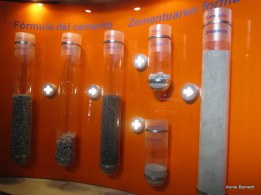 I was the only person at the Rezola Cement Museum in San Sebastián last Saturday morning. This wasn’t that surprising really; after all, San Sebastián is not exactly short of attractions. There’s all those Michelin-starred restaurants for a start, dozens of tempting pintxos bars, three splendid beaches and that elegant promenade to swan along. There are other museums too – although mercifully not too many – but the lure of the cement museum was too strong to resist. Maybe because I’ve never even heard of a cement museum anywhere else, let alone been to one.

So I got on a number 25 bus which, 10 minutes later, dropped me right outside the museum, just outside the centre of the city in the Añorga district. The exterior was unpromising, a bit tatty, vaguely reminiscent of a 1970s provincial polytechnic.  The decoration on the front that looked like motorway signs turned out to the work of local artist Ibon Mainar and had been installed two years ago – supposedly on a temporary basis – to commemorate the museum’s 10th anniversary. It aims to create a connection between the seemingly contradictory concepts of camouflage and signage, in case you were wondering.

Anyway, it was time to go in –   free admission too.  I was soon learning how this part of the Basque Country was transformed by the  industrial revolution, which really got underway here  in the second half of the 19th century.  Factories appeared in the valleys, along rivers, railway lines and roads, transforming the landscape and villages forever.

The cement industry emerged because of the rich seams of  limestone and marl – which is a mix of calcium carbonate, clay and other stuff, as I’m sure you are aware. I now know all about how cement is produced, but don’t panic, I’m not going to divulge this fascinating information –  I don’t want to spoil it for you as no doubt you’ll be hotfooting it there yourself before too long.

José María Rezola Gaztañaga (1822-1867) opened his first factory in a converted flour mill in Añorga in 1850. Taking advantage of the extraordinary quality of the limestone from a nearby quarry, the new industrial plant began making natural cement. The factory developed and expanded over the years and at the beginning of the 20th century they started producing artificial cement using the Portland model.

Having this massive great factory on the doorstep obviously changed things quite a bit for the local residents – known as Añorgatarras – whose lives up until then had revolved  around rural activities. As happened elsewhere in the Basque Country and  also in Catalunya, a colony grew up around the factory. As well as housing for the workers, there was a medical centre, a church, areas for games and cultural activities, a hairdresser’s and a barber’s. The museum stands on the site of the school. Over the years, Rezola sponsored fiestas, sporting events, film and theatre clubs, and a local magazine.

This was all happening during the same period as San Sebastián was developing as a swish seaside resort, after Isabella II started frequenting the town on the pretext of improving her skin complaints. The glamorous image was consolidated by Maria Christina, the widow of Alfonso XII and mother of Alfonso XIII,  who spent most summers there between 1887 and 1928.

From now on, whenever I’m wallowing in the belle époque vibe that still lingers so appealingly in the centre of San Sebastián , I’ll also be thinking of what was happening just a few miles away in Añorga.  Who would have thought cement could be so interesting? Oh. Just me then. Suit yourselves.