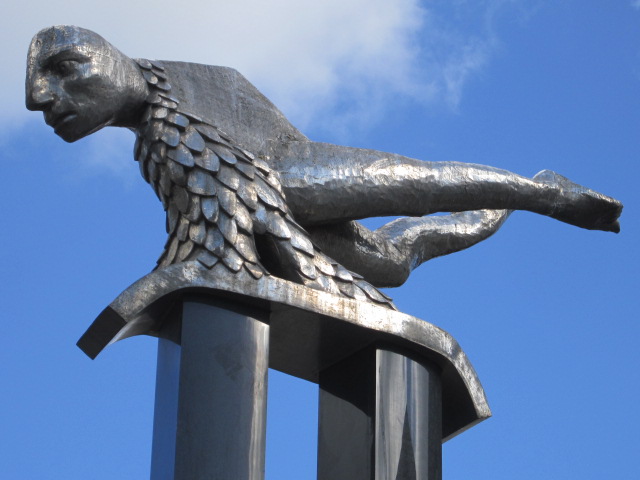 This aluminium sculpture in the Porta do Sol square in the centre of Vigo is called El Sireno – The Merman – and was created by Francisco Leiro. Set high on two pillars of black granite, the figure – half man, half fish – stares out to sea. It’s been there for more than 20 years now, since 1991, and apparently the locals are gradually, if begrudgingly, becoming rather fond of it.

I knew Francisco Leiro a bit when he lived in Madrid in the 1980s – he’s been based in New York for a long time now. He was already a successful artist back then, making great blocky wood sculptures. Leiro – usually with his mate Antón Lamazares, also from Galicia and also a renowned artist – was one of the gang who seemed to spend just about every night out on the town. And I should know. These were the latter years of the movida madrileña, the explosion of creativity and debauchery that began following General Franco’s death in 1975.

Leiro, however, was also a key figure in another movida that had emerged at around the same time in the late 70s in Vigo (he was born in the nearby town of Cambados). We were very much aware of the Vigo scene in Madrid, as several of the key bands we were listening to and seeing live came from there. The movida was all about the music really.

When I arrived in Madrid in 1983, the place to go was a bar called Ras on Calle Barbieri in Chueca – which was kind of a cool neighbourhood even then, although much tattier and with shops selling string and chickpeas rather than designer pants. And when I think of Ras the song that always plays in my head is No Mires a Los Ojos de La Gente by Golpes Bajos – from Vigo – who had a sort of Simply Minds sound with traces of Echo and the Bunnymen. The lead singer, Germán Coppini, was previously in another of my favourite bands, Siniestro Total, a much punkier group, who formed in Vigo in 1981 and are still going after 30 years.

When I turned up once to see them at the Sala Universal in Madrid, there was a huge crowd outside and word was that the gig had been cancelled.  The health and safety police had deemed the venue unsafe as they were afraid that a few thousand fans jumping up and down would lead to the floor collapsing into the bingo hall below. We were having none of it and stormed in anyway. Fabulous concert, and as far as I know the floor is still intact today.

My favourite Siniestro Total song is the cheery anthem Bailaré sobre tu tumba – I’ll dance on your grave. Always puts a smile on my face and excellent for practising the future tense too.

If you fancy going to Vigo, Vueling flies there from London Heathrow.