The Ecoparque de Trasmiera, a nature reserve on the coast of Cantabria, has just won the EDEN (European Destinations of Excellence) prize. This is an award that recognises the best sustainable tourism projects in the European Union, particularly when the scheme promotes the conservation of local identity and heritage.

I spent a few days on the Trasmiera coast last year and visited several places in the Ecopark, which covers the Santona and Noja marshland area. First of all I spent an hour or so in the new Mirador de las Marismas visitors’ centre in the harbour in Santona, which gives you a quick idea about the ecosystems in the marshes and the wading birds, particularly spoonbills, curlew sandpipers and avocets, that stop off on their migration routes. 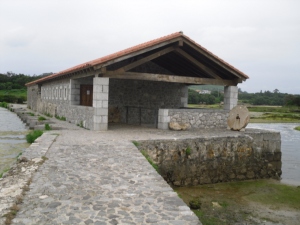 Throughout the area, traditional buildings have been restored and turned into venues that are now used for cultural or environmental purposes. The most fascinating for me was the Santa Olaja Mill, where you can see how the force of the tides was harnessed to grind wheat.

A church, the Iglesia de la Asuncion, has become an exhibition centre, where the work of local artists is shown. For centuries, the Trasmiera area was renowned for its artisans and stonemasons, who built churches, bridges and other structures not just in Cantabria but throughout Spain.

The wonderful Manzanilla and more from @mercado44shop - should brighten up the weekend!
Lots of foals down Rhossili today
Glorious day for a walk from Pennard to Three Cliffs
My photographer friend Michelle Chaplow has just sent me this happy photo of us with chef Paco Montero a few years ago at the fabulous Abadía Retuerta Le Domaine hotel, which is surrounded by vineyards in Valladolid province. Can’t wait to do more hotel research Michelle!
Wish I was swimming in the spa pool at Finca Cortesin this morning
Dramatic light over Swansea Bay today
Loading Comments...
Comment
×
%d bloggers like this: