November in the Alpujarra is a busy time. One of my favourite places, I go there as often as I can, and had the chance to visit my old friends Conor Clifford and Shelagh Munry there last week. Having been bitten by a dog in Granada,  I wasn’t on top form, but was sure a few days of pure mountain air and the mineral-rich water would do me good. Conor and Shelagh have lived in the Alpujarra on and off for around 30 years, long before it became fashionable, and have restored an old house in Fondales, one of a cluster of seven villages in the bottom of a steep valley.

I tried to pick almonds by beating the tree with a stick with my one good arm, but frankly wasn’t much help. Feeling a bit faint in the surprisingly fierce November sunshine, I rather pathetically went to sit under the grapevine in the field in front of their house. Conor was busy picking grapes from another vine that was growing on the roof of the house, with which they were going to make some wine.

The roofs in the Alpujarra are flat, made with chestnut beams and a layer of launa, a magnesium-rich clay peculiar to the area. The houses were originally built by the Moors, who arrived at least 1,000 years ago. Many more settled there after they were forced to leave Granada and remained until the final expulsion, halfway through the 17th century, when they fled to North Africa. The only other place with structures like these is the Berber populations of the Atlas mountains. Seen from above, it looks as if a mauve blanket has been thrown each of the villages. 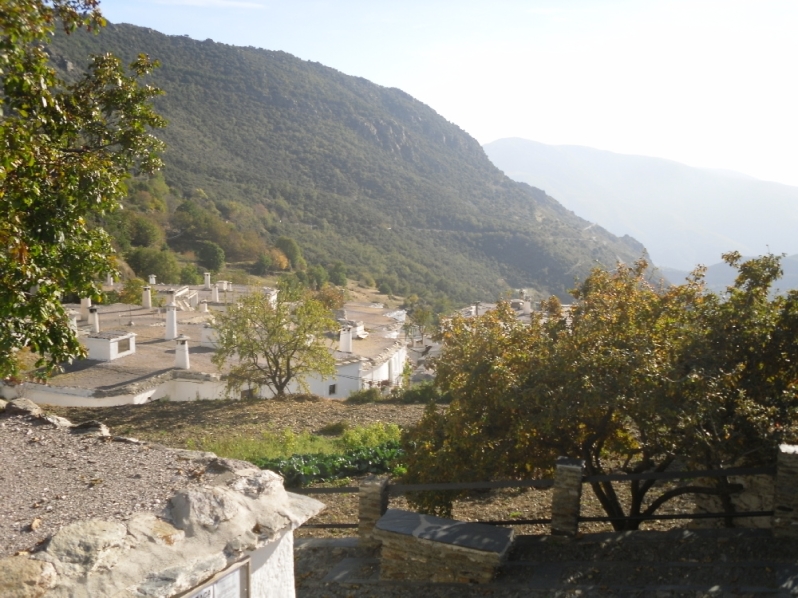 After restoring the Fondales house, and previously their other property in the village of Bubion, Conor has learned how to repair these roofs using much the same techniques as the Moors centuries ago – he swears they would have used a bit of plastic sheeting if only it had been invented back then – and is now much in demand repairing roofs all over the area in readiness for the winter. He says it’s more like an archaeological exercise, stripping back hundreds of years of history. Next time I go, when I’m not incapacitated by an infected arm, I’m going to give him a hand – or at least lurk around pretending to help.

My photographer friend Michelle Chaplow has just sent me this happy photo of us with chef Paco Montero a few years ago at the fabulous Abadía Retuerta Le Domaine hotel, which is surrounded by vineyards in Valladolid province. Can’t wait to do more hotel research Michelle!
Wish I was swimming in the spa pool at Finca Cortesin this morning
Dramatic light over Swansea Bay today
Here’s to hopping into 2021 and skipping ahead a few months until we’re all jumping for joy again. Happy new year everyone! 🥂🍾
Current mood...
All set for a virtual drive around Catalonia, tasting the local specialities along the way @catalunyaexperience #GrandTourCatalonia #ajourneyfullofjourneys
Loading Comments...
Comment
×
%d bloggers like this: