This blancmangey white blob, against a very murky sky, is the Oscar Niemeyer International Centre, which opened at the end of March in Aviles, in the region of Asturias in northern Spain. Now it is all swish and sleek, but this is how it appeared last June when I went to Aviles to have a look around what was then a building site. I was lucky to see the dome actually, as it had only just been created, by pouring concrete over an inflatable PVC mould – which took just one day. I’ll go back soon to see how it has turned out now that it is finished and functioning.

Until now, Aviles has been generally regarded – albeit mistakenly – as a rather dismal industrial town. Known for its iron and steel industry, it had been in decline for years. It is hoped that its new architectural icon will work its magic and will do for Aviles – and Asturias – what Frank Gehry’s Guggenheim museum has done for Bilbao.

Back in 1989, Oscar Niemeyer – who is now 103 – was awarded the prestigious Prince of Asturias Prize, which is given in recognition of outstanding achievement in the arts, science, sport and various other fields. Woody Allen was given the prize in 2005, and has since become a bit of a regular visitor to Asturias, which has conferred him with something approaching sainthood in the region. He came to Aviles for the opening of the Niemeyer Centre, playing clarinet with his band in the piazza.

Niemeyer promised to design a building for Asturias in thanks for being given the award, and in 2005 sketched his idea on a napkin and handed it over. Six years later, the concept is a reality. As well as the dome, there is a wave-shaped structure for concerts and performances. The wall at the back of the stage is retractible, opening the space up to audiences in the square outside. The third main element in the complex is a lollipop tower which will have a restaurant in the circular structure plonked on the top.

The centre is situated alongside the Aviles estuary, which still looks pretty grim and dilapidated. This is gradually changing, however. There is a promenade along the bank and Norman Foster is in charge of revamping the area – a major project and is going to take some time.

And Aviles itself? Is it really such an ugly place? Not at all. Maybe due to lack of interest over the years, it has managed to preserve its medieval heart and is packed with palaces and opulent mansions. I love unfashionable, old-fashioned, provincial towns in Spain, so this was right up my street.

The way small children are dressed in different parts of Spain can reveal a lot about what a place is like. In Aviles, as soon as I arrived I saw a toddler wearing a white crocheted bonnet.  That told me all I needed to know about Aviles really.

The Spanish travel writer Paco Nadal wrote in El Pais last week about how he surprised he was the first time he went to Aviles, when he was walking the pilgrimage route across northern Spain to Santiago de Compostela: ‘I remember I entered the town along Calle Rivero, which was flanked by porticoes, and when I emerged in the Plaza de Espana, the nerve centre of old Aviles, what I saw was a scene that couldn’t have been further removed from that of a grey town devoted to iron and steel. The square is an almost perfect baroque space, a tunnel through time, enclosed by the town hall and other palatial buildings.’

I was staying in the Plaza de Espana, in the Palacio de Ferrera, a grand 17th-century mansion that is now a hotel – not a Parador, surprisingly, as it fits the bill perfectly. 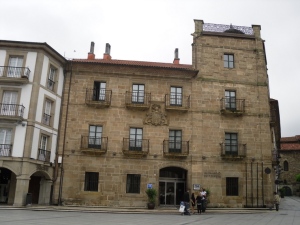 I walked down porticoed, pedestrianised streets to Sabugo, the oldest part of Aviles. Bordering the estuary, this was traditionally where the fishermen and shipbuilders lived.  Although it is very rundown in parts, many houses have brightly-painted facades with wooden balustrades. The narrow lanes are filled with tapas bars and pavement cafes, but otherwise it looks as if nothing much has changed since medieval times.

The hub of the neighbourhood is the Plaza de Carbayo, dominated by the Sabugo church, which was begun in the 13th century. I managed to grab a table at one of the terrace cafes, which were packed with families on a Sunday afternoon.

There was nothing remotely cool about the scene. There were no directional haircuts or on-trend accessories – quite a relief these days.  The city’s elegant new symbol looks, however, like it’s all set to shake Aviles out of its shabby slumber into a much shinier, swankier future.

Thanks @trottaroundswansea for bringing these lovely bars of dark chocolate with wrappers by local artists back from Paris. *Almost* too pretty to eat... #chocolate #artisanchocolate
Cherry sundaes 🍒 and americanos at Joe’s Ice Cream Parlour in Mumbles with @trottaroundswansea and @justlewis70
Not a tapa - prawns in tempura ‘starter’, £5.95. Chips and champagne extra. 🦐🦐🦐
Very impressed with this gentleman in his classic Spanish cape - no doubt from @capas_sesena - in the queue for traditional Christmas sweets and biscuits #Madrid
The Metal Arts in Al-Ándalus exhibition has just opened @manarqueologico in Madrid. This beautiful object is a 14th-century copper Nasrid inkwell found in Cuéllar in Segovia. #LasArtesdelMetal #madrid #nasridart #alandalus
The last pincho de tortilla in Bar Cerveriz in the Plaza de San Miguel. Best in Madrid. They’re closing tomorrow as Carlos (in the kitchen) and Maria Ángeles (behind the bar) are retiring. Happy for them but we’re really going to miss them. Packed now on a Friday lunchtime - rather different vibe from the Mercado de San Miguel a few yards away! #BarCerveriz #Cerveriz #tortilla #tapas #madrid #madridcastizo #madridmemata #madridmemola
%d bloggers like this: