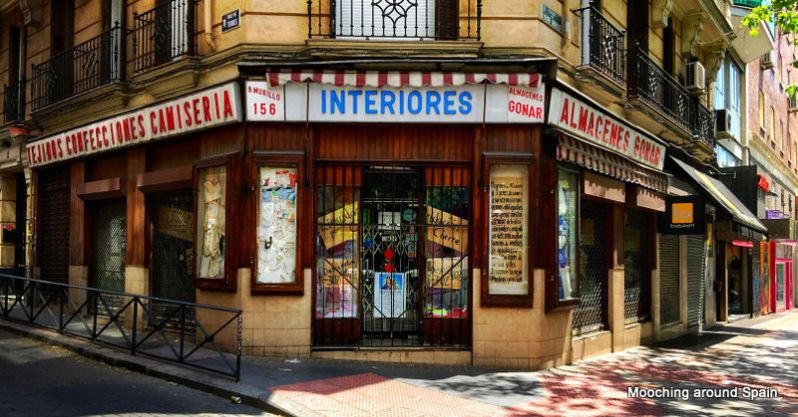 I was walking down calle Bravo Murillo in Madrid last week. The street is not on any tourist routes and could never be described as charming or anything – it is certainly not fashionable or cool in any way – but I like it because it’s lined with the kind of unglamorous neighbourhood bars and shops that make Madrid what it is, reflecting the traditional and multicultural communities that live in the area.

Like everywhere, however, the old establishments are disappearing. This is Almacenes Gonar, which was founded on another site down the road in 1929 and has been at number 156 since 1932. All that time, it has been run by the González family, but they are now reluctantly throwing in the towel, unable to survive in the modern age of internet shopping and department stores – as well as an ever decreasing demand for sturdy undergarments presumably.

Unusually in our youth-orientated world,  they are more interested in selling the things elderly people want to buy and also supply overalls and tunics and what not for people who work in care homes. They sell sensible pants, corsets and stockings, as well as shirts, pyjamas and nighties. Everything is made in Spain, which is quite astonishing these days. Inside, members of the González family stand behind a wooden counter, patiently taking boxes down from the shelves behind them to show to their customers, many of whom have been shopping there for decades.  The shop is also a place of pilgrimage for costume designers on the hunt for just the right items for films and television series.

The poignant handwritten note in the right hand window panel says: “After 90 years and three generations at your service, we are obliged to close, much to our regret, because we cannot compete with certain sales’ methods. Thank you very much for all these years of loyalty and we wish you all the best.”

Almacenes Gonar is closing for good on May 31st.