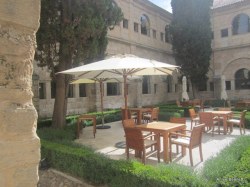 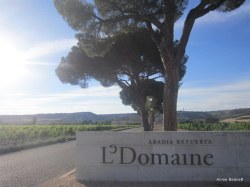 I was lucky enough to spend a weekend at the Abadía Retuerta LeDomaine hotel in Valladolid province in July and I must say it is one of the best places I have stayed in Spain.

Although LeDomaine was formerly an abbey, dating back to the 12th-century, it is very much a 21st-century hotel, so it is not entirely surprising that guests can now try out the new Google Glass during their stay, as reported this morning in Hosteltur.

In case you have been living under a stone – or maybe just stuck in a hotel with dodgy wifi – this is a pair of glasses that enables you to do all sorts of things simply by blinking or by a voice command, including taking photos or videos, which can be immediately shared on social media. Guests can also use Google Glass for stargazing and for getting information on the history and architecture of LeDomaine as they walk around

LeDomaine is a spectacular building in the Abadía Retuerta vineyards with fabulous food created by Pablo Montoro, while- Andoni Luis Aduriz of the two-Michelin-starred Mugaritz oversees the restaurants.. There are plenty of photo opportunities, believe me! Think I might just have to nip back and try it out.

I travelled from Madrid to Valladolid by train with Voyages-sncf.com.

Into the dunes at Oxwich bay
Mooching around Mumbles
January hues at Rhossili - don’t know how those sheep don’t get blown off the cliff.
Sculptural trees in Clyne Gardens
Dickslade is a little alley of fishermen’s cottages on the seafront in Mumbles. Now gorgeous bijou airbnbs of course!
Sensible people on the shore under big umbrellas watching their friends and families surfing and swimming in the rain at high tide
Loading Comments...
%d bloggers like this: