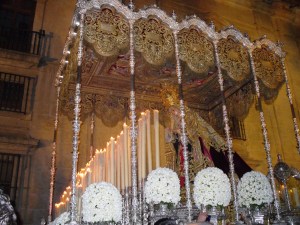 Hundreds of penitents in white habits, their identities concealed by pointed hoods with small openings for the eyes and mouths, moved slowly through a narrow street in the centre of Seville. It was Easter, and this was just one of the processions that take place in the course of a week, when revered figures of Christ and the Virgin Mary are put onto elaborately-decorated floats, taken out of the churches where they are usually kept, and carried around the city. Some of the penitents carried huge crosses, balanced on one shoulder, others had long candles, sometimes taller than they were themselves.

Later that night, I watched a procession under a full moon in the Murillo gardens, with the delicious scent of jasmine and orange blossom wafting through the night air. Although there was a crowd of thousands, there was barely a sound to be heard. Most processions are accompanied by brass bands, but this one was totally silent, making the snaking line of penitents seem even more eerie as they wound their way through the gardens and back into the labyrinth of lanes of the old town.

As soon as the procession had passed by, and people had seen the figure of Christ, the dense crowd melted away and dispersed into the night, already headed for the next key location to witness the following spectacle.

This devotion not only to the figures of Christ and the Virgin Mary, but also to the many traditions and rituals of Easter week in general, is understandably often quite baffling to the onlooker who has just arrived in Seville – or in any of the many Spanish towns and villages where similar, if more low-key, processions take place – but these customs are deeply-ingrained in Spanish society, among all ages and even among people who perhaps barely attend a mass during the rest of the year.

This week, a taste of this mesmerising phenomenon  comes to London, with The Sacred Made Real (http://bit.ly/wHQyj, October 21st-January 24th ) at the National Gallery, an exhibition that features Spanish polychromed sculptures from the 17th century. Some of these are the very figures I saw being carried through the streets, others I saw on display in Seville’s superb Museum of Fine Arts. Still more will come from the museums and churches of Madrid, Valladolid and Zamora.As I had witnessed, these figures are far from mere museum pieces. It was quite extraordinary to see the powerful emotions these artworks evoked in the citizens of Seville and it proves that deep-seated traditions can not only exist but thrive alongside contemporary cultural developments.

Into the dunes at Oxwich bay
Mooching around Mumbles
January hues at Rhossili - don’t know how those sheep don’t get blown off the cliff.
Sculptural trees in Clyne Gardens
Dickslade is a little alley of fishermen’s cottages on the seafront in Mumbles. Now gorgeous bijou airbnbs of course!
Sensible people on the shore under big umbrellas watching their friends and families surfing and swimming in the rain at high tide
Loading Comments...
%d bloggers like this: